A suspension of microscopic letters marks a key step towards complex engineering on the nanoscale.

A fluorescent alphabet soup cooked up by US researchers has demonstrated the ability of a new technique to mass-produce complex shapes on the micro and even nanoscale.

Thomas Mason and his colleagues at the University of California, Los Angeles, US, created a colloid or suspension of billions of letters from the alphabet in a liquid solution. Their wordy stunt, published in the Journal of Physical Chemistry, has demonstrated the potential of an improved and miniaturised version of a printing system known as lithography, which was first developed in the 18th century. 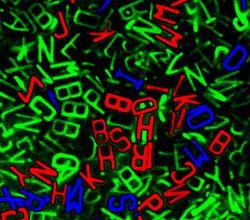 Waiter, there’s a nanolithoparticle in my soup

The researchers said that their tiny letters or ’lithoparticles’ displayed ’exquisite fidelity of shape’ and that their approach marks the first step in mass nanoengineering of working devices in a solution. ’To my knowledge, we are the first to produce alphabet soup at such a small scale with great uniformity of the letters,’ Mason told Chemistry World.   ’This shows we can precisely mass-produce a wide variety of shapes with essentially the same amount of effort and the same process.’

The lithoparticle letters were printed on specially prepared silicon wafers. These were coated with a sacrificial layer of water-soluble polymer and, on top of that, a resist layer of UV-light-sensitive polymer that had been laced with fluorescent dye. The letters were marked into the resist polymer by UV light, which was shone through a mask or stencil, causing the polymer to cross-link into alphabet shapes.

Just like a miniscule version of the plastic stencils in well-equipped students’ pencil cases, this mask contained miniature cut-outs of all of the letters of the alphabet; each letter is just 35 micrometres long. A lens positioned between the stencil and the coated wafer focused down beams of UV light having shapes of letters, shrinking them to under 10 micrometres in length at the wafer’s surface. The resulting letters are more than ten times smaller than the width of a human hair.

The so-called sacrificial layer was then dissolved using an aqueous solution, which also suspended the tiny letters in the liquid, making the resulting alphabet soup.

The researchers were able to use the same approach to make other three-dimensional shapes including triangles, pentagons, and doughnuts.

Mason said that this result demonstrated the ability to mass-produce complex particles, controlling their shape on a smaller scale than ever managed previously by scientists. ’We will be pursuing the question of whether we can control and direct the assembly of tiny components into a machine that works. For example, if we could mass-produce a small-scale engine,’ he added.