Unnatural amino acids (UAAs) have been expressed for the first time in complex multicellular organisms. Researchers hope this will open up new ways to track biochemical processes and disease pathways.

Jason Chin and Sebastian Greiss from the Medical Research Council Laboratory of Molecular Biology in Cambridge, UK, modified the model genetic organism Caenorhabditis elegans - a tiny worm - with a short gene containing codons for green fluorescent protein (GFP) and a red fluorescing GFP variant, known as mCherry. These two genes were separated by a ’stop’ codon that would normally halt protein production. However, the scientists supplied the worms with a tRNA molecule which is known to be complementary to it. 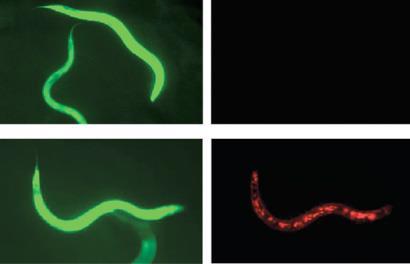 This special tRNA can carry UAAs and enabled Chin to create polypeptides that would not be found in nature. Chin has previously showed that this tRNA and a corresponding enzyme can build several different UAAs into bacterial proteins. In this work two modified lysines were used, where the side chain amines were derivatised to tertiarybutyl- or propynyl-carbamates.

When the normally transparent worms began to fluoresce red, Chin and Greiss knew that mCherry was being expressed and that the stop codon had been repurposed to code for a UAA.

Although the red fluorescence provides good indirect evidence that the UAAs are being incorporated, the researchers could not directly prove that tertiarybutyl UAA was surviving intact in vivo. However, the presence of the alkyne UAA could be confirmed by labelling with biotin. Standard biological assays confirmed the presence of the biotin labels and, therefore, the UAAs.

C. elegans shares many biological pathways with humans, especially those associated with neurological processing. UAAs could potentially act as sophisticated chemical handles to facilitate protein imaging or probes to help elucidate the molecular mechanisms of disease.

Edward Tate from Imperial College London, UK, a specialist in biological chemistry says: ’It’s potentially hugely powerful and has taken a whole load of innovation.’ Although nematodes are an easy organism to deliver UAAs to, it was hard to get them to express the new genes. Chin was unavailable to comment, but his paper reports that some intricate genetic work-arounds were necessary to get the worms to express the new genes.

’The other option would be to use an organism that’s a bit more complex, but where the genetic tools are already established, like mice,’ Tate says. But supplying the unnatural amino acids to these types of organisms would be ’a huge challenge,’ he adds.