Scientists in China have genetically engineered yeast to turn methanol into heparin. The work is a step towards a sustainable production process for the essential anticoagulant that could mean drug makers no longer need to source it from animals.

Heparin, a glycosaminoglycan, is a natural anticoagulant synthesised by the liver, intestine and lungs of mammals. Commonly used to treat and prevent blood clots in people undergoing major surgery, pregnant women and people with cancer – ‘the clinical demand for heparin is large,’ explains Zhen Kang from Jiangnan University in China. 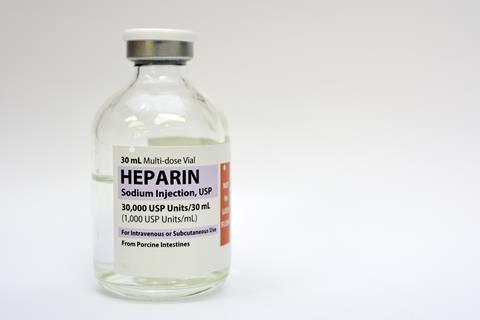 Pigs are the prime source of heparin used in injections to treat and prevent blood clots in people undergoing major surgery, pregnant women and people with cancer

Medicinal heparin is extracted from livestock tissue – particularly pig intestines. However, extensive use of strong acids, contamination with other glycosaminoglycans, poor quality control and variations in its structure contribute to concerns over the reliability and safety of sourcing heparin in this way. A contamination incident in 2007 and 2008 resulted in about 100 deaths in the US alone. And swine fever outbreaks frequently disrupt global supplies.

The contamination incident prompted researchers around the world to investigate alternative supply strategies, including chemical synthesis, microbial production, chemoenzymatic modification and enzymatic methods, as well as new animal sources. These strategies suffer from a range of limitations – including high costs, subpar anticoagulant activity and complicated synthetic routes – all of which limit their scalability.

Now, Kang and his colleagues have developed a heparin production process that uses the methylotrophic yeast, Pichia pastoris. Yeast is easy to cultivate and grows quickly. Also, as it does not naturally make any glycosaminoglycans, purifying the heparin is easier.

Kang’s team modified P. pastoris so that it would biosynthesise heparin, via heparosan. This included genetically engineering it to express certain sulfotransferases and epimerase enzymes. Batch-fed cultures generated 2.08g/l of bioengineered heparin. This is the first time that heparin has been synthetised by a microbe in which no single step is catalysed by chemical catalysts – all the reactions are catalysed by enzymes expressed in P. pastoris.

‘It’s a really cool, exciting piece of science,’ comments Susan Sharfstein, whose research at the Suny Polytechnic Institute in the US involves developing cell systems that produce therapeutic proteins and carbohydrates. ‘The real question is, are they going to be able to scale it up in a cost-effective manner?’ According to Kang, the protein expression and enzyme activity need to be improved to increase the yield and scalability, and there is a lot of work to do to scale up production. The team concede that it is hard to estimate the cost of the bioengineered heparin right now, but say there will be both economic and environmental benefits if the engineered yeast can be applied on a large scale.