Bacterial chemicals that encourage female mosquitoes to lay eggs could help to stem the spread of mosquito-borne diseases like dengue and yellow fever, according to US scientists.

Coby Schal and colleagues at North Carolina State University have shown that female mosquitoes of the species Aedes aegypti respond to simple fatty acids, such as tetradecanoic acid, and esters in bacterial cell walls. The researchers plan to use the stimulants to persuade pregnant mosquitoes to spend more time on waters laced with insecticides or biological control agents.

’The beauty of the compounds we’re working with is that they act on not just females but pregnant females,’ says Schal. Pregnant female mosquitoes are key targets for disease control programmes because, unlike males, they feed on blood and so can carry and transmit disease. 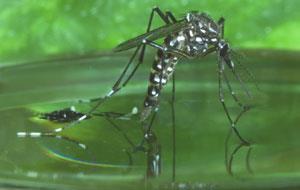 A female Aedes aegypti mosquito laying eggs in water treated with tetradecanoic acid, an egg-laying stimulant. A clump of older black eggs, laid by other females, is on the left.

Schal’s team identified the compounds that stimulated egg laying by fractionating extracts from bacteria found in water. By providing the insects with a choice between two cups - one containing bacterial compounds and one containing only water - they were able to identify the most potent stimulants.

The compounds could be helping female mosquitoes to decide if a location contains enough of the right bacteria to feed their offspring, says Schal. Female mosquitoes probably detect the chemicals through chemoreceptors on their feet, or on egg-laying organs called ovipositors. ’From looking at the behaviour of the female, from the way she rocks on the water, it appears that the ovipositor is very likely involved,’ notes Schal.

The compounds are found in many foods, including oils such as coconut oil. ’These are very safe compounds, so if we put them in traps they would be safe to humans, pets and the environment,’ Schal says.

Michael Birkett, of the Rothamsted Centre for Sustainable Pest and Disease Management, says the research shows potential for developing disease control strategies. But he stresses that such strategies will depend on finely balanced formulations of the stimulating compounds. ’There’s very clear data in this study that shows that if you get an inappropriate dose or mixture of compounds, then you’re going to lose activity,’ he says.