Your hair knows where you've been

Heavy isotopes in your tresses reveal where you live

From a single strand of hair, scientists can now determine where a person has been living recently. The technique analyses heavy isotopes that vary according to local tap water, and is beginning to be used by US police to investigate unsolved cases.

’You are what you eat and drink - and that is recorded in your hair,’ said Thure Cerling, who led the research, along with colleague Jim Ehleringer, at the University of Utah in Salt Lake City. Previously, the team developed a method to determine where drugs such as cocaine were produced, based on isotopes absorbed by coca plants from soil and water. They have now extended this work to examine human hairs in the same way. 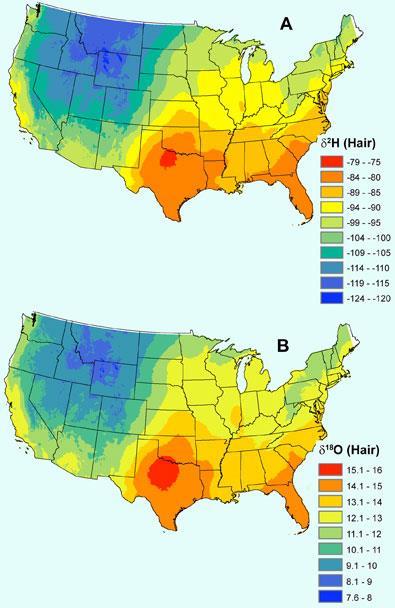 The maps show the average H isotope and average O isotope ratios in human scalp hair across the US. Isotopically heaviest hair occurs in the southern states, particularly Texas and Florida.

The isotopes in local drinking water are ultimately incorporated into the amino acids present in hair. The team used mass spectrometry to  compare water samples with hair collected from barbershops in 65 cities across the US. These data allowed them to predict the expected isotope ratio of a hair sample, based on the ratios present in the local tap water.

They used this to build up colour-coded maps that predict hair isotope ratios, allowing any new sample to be tested and geographically located. Although the technique is not accurate enough to pinpoint individual towns or cities, the researchers believe that with more data samples the accuracy could be improved.

"I think this will become a very useful tool for law enforcement across the US" - Detective Todd Park, Salt Lake County, Utah

’The weather and climate in London is dramatically different from Edinburgh, for example,’ Ehleringer told Chemistry World. ’The temperature and rainfall gradient between the two should produce variations in isotopes that are recorded in peoples’ hair.’

The isotopic signatures are not significantly skewed by food or other drinks like milk, Ehleringer adds, as the majority of these products are made locally and consumed in relatively small amounts.

Detective Todd Park investigates ’cold’ homicides in Salt Lake County, Utah, and has been using the new technique to identify some human remains found in the wilderness seven years ago.

’We really knew very little about her,’ Park told Chemistry World. ’But using this process has allowed us narrow down the search area quite substantially.’

’I think this will become a very useful tool for law enforcement across the US, especially in cases of missing persons or unidentified bodies,’ Park added.

But this technique is not only for forensic uses. Ehleringer is confident that hair analysis could be adapted to help doctors spot dietary illnesses, or allow archaeologists to examine the foods that ancient people or animals consumed.