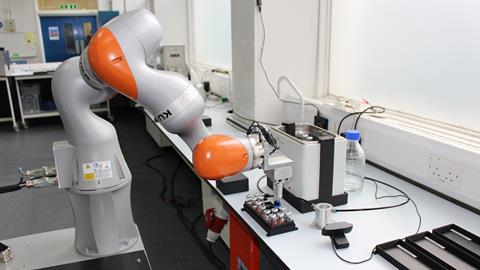 Source: © Cooper Group at the University of Liverpool

A mobile robot chemist has shown endurance unrivalled by its human colleagues by working for eight days straight – navigating the lab even in complete darkness – and performing 688 reactions.

Devised by Andrew Cooper’s team at the University of Liverpool, UK, the robot ran experiments to optimise hydrogen production from light and water. ‘The most exciting point is that this could be applied to a lot of different chemistries, not just photocatalysis – and actually not just chemistry,’ Cooper says.

The idea emerged because of a shortcoming Cooper saw in the way that chemistry labs typically use automation: in static systems with different integrated functions. ‘If you want to put a new instrument into a hardwired set up it can take a year and it’s expensive,’ Cooper says.

Meanwhile, chemistry instruments are generally designed for use by humans. ‘We came to the conclusion that technically difficult though it might be, it might make more sense to automate the researcher rather than the instruments. It seemed like a crazy idea at the time, and lots of people had reasons why it wouldn’t work.’ Even the robot’s supplier, German automation experts Kuka, was unsure about the idea when Cooper asked whether it would work. ‘They said “We don’t know, why on Earth would you want to do that?”’ he recalls.

The system has a robotic arm with a gripper at the end mounted on a mobile platform. It uses laser scanning to locate objects and touch feedback to monitor its grip strength. As such, it can dispense liquids and solids, and move vials where the reaction happens between instruments such as a photolysis station and a gas chromatograph.

A different way of working

Laser scanning also offered a simple solution to ambient light interfering with the team’s photocatalytic reaction. ‘Simply for speed, we blacked out the lab and ran it in the dark,’ Cooper says. The robot’s laser scanners were able to work equally well under these circumstances. However, this left humans unable to enter, so ultimately the researchers painted the vials black instead and relit the lab.

Cooper stresses that in these experiments the robot did around 6500 separate operations. ‘You need an extremely low failure rate per operation to have any chance of running for extended periods,’ he says. ‘And that was very hard to do. To be honest, one year into the project, I thought “We will never achieve this”, because it seemed impossible. It took a year to go from a situation where this thing was failing multiple times a day to running for multiple days.’

Consequently, the researchers are now looking to adaptive learning. ‘The robot will learn from errors and accommodate them by changing its behaviour,’ Cooper says. ‘Realistically, you can’t eliminate all failures.’ 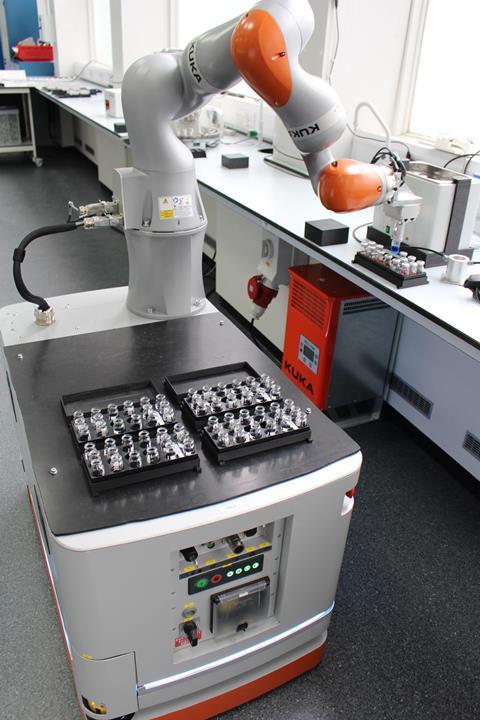 The robot’s gripper can handle delicate glassware, placing reaction vials on its platform to move them between instruments

For this study, the team devised an algorithm that enabled the robot to progressively optimise a photocatalytic system based on prior experiments’ results. To boost the performance of a polymer catalyst, it explored additives including three dyes, two surfactants, and three salts – sodium hydroxide, sodium chloride and sodium disilicate. The algorithm used prior results to estimate which changes would generate the biggest improvements. The final mixtures it obtained produced hydrogen six times more quickly than the initial one.

The University of Glasgow’s Lee Cronin finds this development exciting. ‘It gives a mobile robot cognitive abilities to interact in the environment and do a range of different tasks,’ he says. ‘The key for future work will be to generate a universal workflow that can be replicated in many labs, and to lower the cost of the system used, but this is surely on the horizon.’

Nessa Carson, an industrial chemist who works in automation for agrochemical discovery in the UK, calls the robot ‘very beautiful’. ‘Screening often starts with intelligent guesses, and the robot’s starting position with five different hypotheses to test over its optimisation is no different,’ she says. ‘But these breakthroughs would not have been made in a single set of experiments by human researchers. Running 688 experiments would probably have deterred even the most diligent of chemists without automated help.’

The Liverpool team now wants the robot to perform even more difficult analytical techniques and act on the complex data generated. Examples include powder X-ray diffraction and nuclear magnetic resonance (NMR). ‘For photocatalysis you have two numbers, hydrogen and oxygen production,’ Cooper says. ‘Interpreting an NMR spectrum or powder diffraction pattern, that’s quite a different thing.’

Cooper also suggests that such systems could eventually interface with scientific literature to consider new approaches. However, he doesn’t see it replacing human scientists. ‘Probably the hardest question for people who do research is: what should we be working on? And right now, this technology doesn’t help you there.’