Researchers in the US have discovered a new way to stabilise and protect protein molecules without affecting the protein’s biological activity. The finding is potentially important because proteins that are used as drugs need to be shielded from the body’s defence systems while retaining their ability to interact with their target.

Currently, the most effective way to stabilise proteins is to attach poly(ethylene glycol), or PEG, to the protein core. The hydrophilic nature of PEG attracts water molecules to form a cushion around the protein and give it extra bulk. This increases the effective size of the molecule, making it more difficult to be filtered from the blood by the kidneys. It also physically prevents attack by enzymes or the immune systems through steric hindrance. However, the downside is that the biological activity of the molecule can be significantly decreased because PEG also has water-repelling, hydrophobic characteristics. Proteins bind their targets through hydrophobic interactions, so the presence of hydrophobic portions on the attached PEG molecules can interfere with this process. 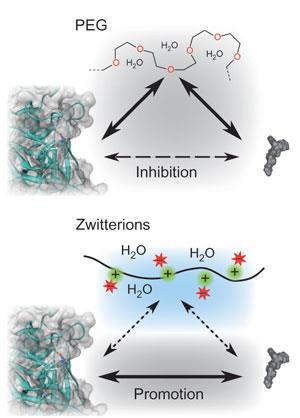 Now, Andrew Keefe and Shaoyi Jiang, of the University of Washington in Seattle, have shown that a different type of protecting molecule, a zwitterionic polymer, can stabilise a protein without impinging on its activity.

The researchers attached molecules of poly(carboxybetaine) (pCB) to the enzyme alpha-chymotrypsin. pCB is a zwitterion - it has both positive and negative charges but is overall neutral. When pCB is attached to the protein, the particular pattern and distribution of charge causes a specific ionic environment around the protein. This in turn - for reasons that are not entirely understood - affects the distribution of water molecules around the protein molecule.

The team found that both PEG and pCB increased the enzyme’s stability in the face of heat and urea. However, PEG reduced the enzyme’s affinity for its substrate, while pCB actually increased it.

’We think that using these types of conjugates might have advantages, and we are now looking to investigate their use with therapeutic proteins,’ says Keefe.

Commenting on the work, Robert Falconer, who studies protein stabilisation at the University of Sheffield in the UK, says: ’This protein conjugate is worthy of further investigation. If it is shown to have demonstrable beneficial pharmacokinetic properties and no adverse effects it may well be of interest to the pharmaceutical industry.’