History has shown us the dangers of self-testing

Although an entrenched tradition in the fields of physiology and medicine, self-experimentation is a path less trodden by members of the chemical community. Newton, of course, is famed for having a poke-about in the depths of his own eye socket with a pointed stick. A laudable effort in the name of optic(k)s but firmly outside the realm of chemistry. We do lay claim to Albert Hofmann, who was responsible for the first synthesis of LSD in 1938. Hofmann discovered the drug’s psychological effects through self-ingestion and later became a respected public exponent of the therapeutic benefits of LSD in psychoanalysis.

A defining legacy of self-experimentation belongs to Alexander Shulgin, whose lifetime was spent in the synthesis and self-testing of psychoactive compounds. An advocate of personal choice in the recreational use of stimulants like amphetamine, Shulgin attracted controversy for his views and for disclosing his synthetic procedures publicly. Under a license (eventually revoked) to conduct independent research into controlled substances for their psychotherapeutic use, Shulgin contributed to many published studies reporting the effects of self-experimentation with hallucinogenic compounds. 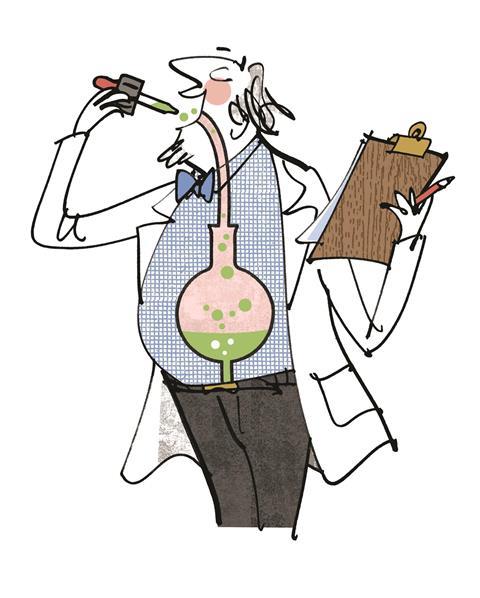 His self-testing regimen for a novel and potentially psychoactive substance involved ‘an initial dose of 10 to 50 times less (by weight) than the effective dose of a close analogue’. This strikes me as rather troubling practice. A close analogue? And without pharmacokinetics data from animal models?

The effective dose was determined subjectively as that beyond which the ‘character’ of an experience of altered consciousness became unchanging. Shulgin typically reports activity in mescaline units (MU), a measure of strength relative to the psychedelic compound mescaline, which is given the measure 1MU. Of course, the hallucinogenic activity of mescaline is also subjective and a central tenet of qualitative research is that its subjective nature is treated honestly. Any attempt to quantify human responses feels disingenuous, although Shulgin acknowledges the limitations of the method in the form of a footnote to his papers indicating that ‘MU values should not be considered accurate to closer than 25%’. Meanwhile, he lumps human testimony alongside results from binding assays and other genuinely quantifiable animal studies.

Shulgin’s lab books testify that he was a skilled synthetic organic chemist. However, without an academic affiliation he struggled to gain professional renown. From autobiographical accounts, there is no doubt that he was compensated by enjoyment of his hallucinatory experiences, in contrast to the sad story of another self-experimenter, Helmut H. Velbinger.

In the early 20th century, Velbinger devoted his career to the study of neurotoxic insecticides, conducting comprehensive studies of their toxicology in vertebrates including mammals. His self-experimentation with organochlorine compounds, including the pesticide DDT, attempted to establish safe levels for their use, both in crop protection and because these substances were being explored as potential chemotherapeutic drugs in the 1940s. His initial dosage of an insecticide, in cod liver oil solution, was extrapolated from the symptoms of reported cases of accidental exposure in agricultural workers, and findings from detailed animal studies. Velbinger downplays the risk involved, and even advises himself: ‘do not, solely on the basis of subjective information, conjecture’. Reporting that a tolerated DDT dose of 10-12mg/kg results in ‘no detectable toxic effects’ from EEG, blood, urine and liver analyses, Velbinger also defined lower dosages for repeated exposures. He died at the age of 33 as a result of persistent self-testing.

Velbinger’s obituary appears in the same issue of the German journal Die Pharmazie as his final paper. Written by a close colleague, it pays tribute to Velbinger as a creative and diligent scientist. Although, our tale of chemical self-experimentation is a cautionary one, we can all aspire to a legacy like that.