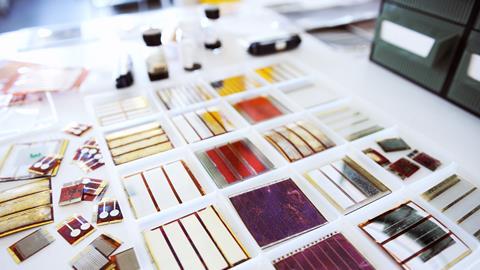 Organic electronic materials offer promising avenues towards environmentally friendly and low-weight light emitting diodes, transistors and photovoltaic cells. In this context, cyclophenylene hydrocarbons, which are macrocycles constructed from simple benzene units directly covalently linked together, constitute ideal candidates for organo-electronic applications. Possessing efficient charge transport properties and high thermal stabilities cyclophenylene hydrocarbons have received considerable attention, furthermore the incorporation of heteroatoms is of particular interest to construct materials with tuneable electrochemical performances. However, the lack of effective large-scale synthesis methods for these macrocycles makes their uses in practical applications challenging, such that if these materials are to be used, they require a synthetic handyman.

Hiroyuki Isobe’s group at the University of Tokyo, Japan, has long been studying synthetic methodologies for preparing various classes of macrocyclic hydrocarbons. The group successfully employed a one-pot macrocyclisation method to synthesise a series of cyclo-meta-phenylene macrocycles ([n]CMP) by treating a selected precursor, m-dibromobenzene, with an organo-nickel compound in a particular solvent mixture.1 They could isolate each macrocycle from [5]CMP to [9]CMP by sequential recrystallisation in different solvents, and obtained [5]CMP and [6]CMP products in a gram scale.

Subsequent attempts to use Ni(0)-promoted macrocyclisation reactions of a functionalised pyridine failed to give a family of nitrogen-functionalised [n]CMP counterparts.2 Where it was postulated the poor solubility of target macrocycles and the deactivation of Ni catalysts by oligopyridyl intermediates formed during the reaction hampered the successful formation of the desired products.

Motivated by these observations, Isobe and colleagues recently reported an alternative strategy to overcome the issues related to the previous synthesis.3 Termed metal-templated oligomeric macrocyclisation via coupling (MOMC), this modified procedure uses 2,6-dichloro-4-xylylpyridine as a precursor; the xylyl substituent enhances solubility in common organic solvents by preventing polypyridyl moieties from aggregating. The synthesis also uses an excess amount of the nickel catalyst that is five-fold larger than used in the previous report.

Isobe and colleagues suggest that nickel serves two roles in the metal-templated macrocyclisation reaction. Firstly, it acts as a passive template that organises and assembles five pyridyl monomeric units through metal-ligand coordination: a nitrogen-donor atom coordinates to the nickel centre. Moreover, nickel also acts as a catalyst, promoting coupling reactions of five pyridyl monomers in a spatial arrangement that affords the macrocyclic product. Surprisingly the researchers could isolate a complex of the macrocycle with NiCl2 exclusively in 53% yield (figure 1). This impressive synthesis was concise and scalable to afford a 57% yield of a large-scale synthesis in one batch.

The MOMC technique uses 2,6-dichloro-4-xylylpyridine precursors and a nickel catalyst to form the macrocyclic product

An X-ray crystallographic analysis of the macrocycle complex revealed a rare example of a seven-coordinated pentagonal bipyramid Ni(II) complex. Five nitrogen donor atoms at the middle of macrocycle stabilise the nickel centre, and two chlorine ligands occupy the axial position of the nickel centre. According to ligand field theory, the d8-Ni(II) pentagonal bipyramid complex possesses paramagnetic characteristics as a result of unpaired electrons on Ni(II). This work also appears to be the first time that 1H and 13C-NMR spectroscopy have successfully determined the structure of a paramagnetic pentagonal-bipyramidal complex, a property remarkably useful for organic electronics.

Having demonstrated that metal-templated cyclisation is a potent method to prepare a medium-size aromatic macrocycle, the research team applied the MOMC methodology to synthesise a larger, nanometre-sized molecule. The team designed a pyridine precursor that, when treated under the Ni-mediated coupling macrocyclisation reaction mentioned earlier, afforded the intermediate 4·NiCl2 (figure 2) in 46% yield and subsequently replaced silicon moieties with iodine. Importantly, the 5-fold cyclisation of the iodine-containing intermediate gave a bowl-shaped macrocycle with Ni(II) at the centre in 29% isolated yield. Courtesy of strong metal-ligand coordination, the synthesis of Ni/N heteroatoms doped 120π-nanocarbon structure is achievable via stepwise synthesis in a good yield (overall yield of 11% over three steps).

This work is a marked success of employing transition metals to organise each small component into the right geometry while promoting cyclisations via coupling reactions in the meantime, allowing for a concise and scalable synthesis of heteroatom-doped nanocarbons. However, a large quantity of Ni(0) is still required to form the desired product. The potential future direction of the research from my perspective is to develop highly efficient synthetic procedures that require sub-stoichiometric amounts of transition metal and to exploit them to synthesise even more challenging molecular architectures. That really would be handy.