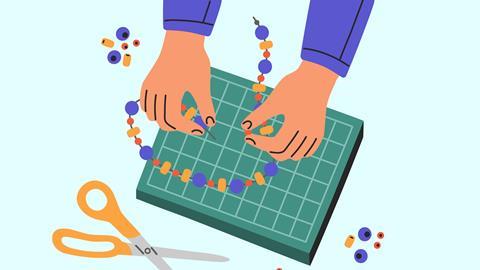 The joy (and pain) of teaching undergraduate organic chemistry escalates when grading exams. In particular, being asked to propose plausible sequences to synthesise target compounds prompts some students to suggest many bold ideas. In their answer sheets, important selectivity issues, such as chemoselectivity (preferentially transforming one functional group over another) and regioselectivity (preferentially functionalising one position over another), are sidelined in a rush to obtain the final products. Acyclic carbon chains easily decrease or increase in length without due cause. However, even the most hasty students remain cautious about reducing and enlarging ring sizes, particularly in the case of heteroaromatic rings, which are notoriously very difficult to transform.

In fact, developing a simple way to transform heteroarenes to another class of heteroarenes is high on the wish lists of many organic chemists. Heteroarenes are ubiquitous in drug discovery as their size, shape and electronic properties vary widely and they enable molecular interactions such as hydrogen bonding and π-π interactions. Therefore, chemists carefully select heterocyclic cores, as well as the type and position of the functional groups bound to them, to provide exquisite control over drug–target interactions and physicochemical properties.

Because it is challenging to add or remove atoms from heteroaromatic rings except in a few limited cases, drug candidates are often prepared by introducing substituents into a fixed heteroaromatic core. This strategy has progressed significantly owing to recent developments in C–H functionalisation, which regioselectively transforms the C–H bonds already present in a heterocyclic core into the desired functional groups. The wide range of substitution types and positions now accessible by C–H functionalisation allows for the late-stage diversification of complex organic compounds, including natural products and pharmaceuticals. However, medicinal chemistry commonly employs a bioisostere strategy, which improves the properties of a prospective drug by replacing particular functional groups with others that have similar biological effects. This involves systematically investigating a series of heterocyclic cores, which usually requires distinct synthetic routes for each core, often beginning from scratch each time, until an optimal core is identified.

An alternative, overlooked approach is to use skeletal editing to transform a heteroaromatic core while retaining the same substitution pattern. In recent years this has focused on carbon insertion and deletion.1,2 Now, Bill Morandi and colleagues at ETH Zürich, Switzerland, disclose a method for nitrogen insertion that significantly expands the opportunities for the skeletal modification strategy.3 Specifically, their late-stage skeletal editing method converts indole, one of the most frequently encountered heteroarenes, to quinazoline, a privileged pharmacophore found in many commercial drugs. This process inserts a nitrogen atom into the indole heterocyclic ring by cleaving a C–C bond. Reacting the electron-rich alkene bond in the five-membered ring with in situ-generated electrophilic iodonitrenes produces aziridine intermediates that subsequently undergo ring expansion. A tert-butyldimethylsilyl group protects the nitrogen atom of indole, an additional nucleophilic site prone to reactions with electrophilic nitrene species, to prevent degradation. Critically, this protecting group can be promptly removed upon aromatisation.

The prevalence of indole in many natural products and drug molecules renders this strategy highly appealing for the preparation of bioisosteric analogues. The operationally simple, metal-free protocol tolerates various existing functional groups, including heteroaryl substituents, at any of the six carbon centres of the indole skeleton. The nitrogen addition converts the electron-rich five-membered ring to an electron-deficient six-membered ring, where the nitrogen atoms serve as hydrogen-bonding acceptors rather than donors, allowing the effects of different heteroarenes to be investigated rapidly. Furthermore, the reaction of indoles fused with a ring at the C2 and C3 positions generates the corresponding quinoxaline products because of steric effects, suggesting the potential to access other heteroarene classes by controlling the substituents. Notably, some of these substituted 6,6-fused aza-arene products are not accessible by traditional cross-coupling and C–H functionalisation reactions because of their insufficient steric and electronic biases. While many methods are available for the peripheral C–H functionalisation of indoles, similar reactions of aza-arenes have only recently been reported.4

It is easy to imagine that such a nitrogen insertion can occur in other (hetero)aromatic ring systems. The addition and deletion of atoms in heteroaromatic rings may one day be as straightforward as adding and removing beads from bead bracelets; that day will come sooner thanks to the results of this study, thereby substantially expanding the chemical space for drug design and development.