All work and no play

Going to graduate school in the physical sciences doesn’t have to be an awful experience, but the truth is that it’s often a less-than-delightful one. You’ll probably get a more accurate account by talking to people who are in the first few years past their degree, while the memories are fresh. With time, the usual reworking goes on in memory, with the worst moments fading a bit and the better ones being reinforced. It’s also entirely possible that someone who is nostalgic for their PhD studies is largely remembering being back in their mid-twenties and missing that instead! 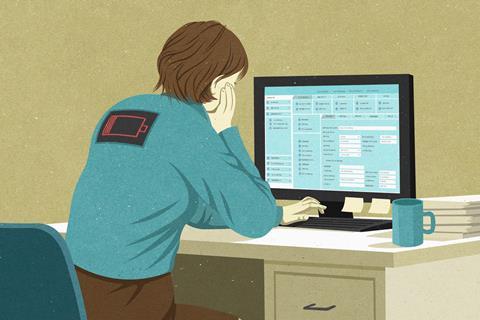 Graduate work is, for most young scientists, the first experience of really trying to make their way in research. That’s a job for muscles in one’s character that probably haven’t had that kind of use before. It can be exhilarating when things work – I think I can still remember every time I really solved a chemical mystery in my project or found my way around an obstacle. Having one of your hard-won ideas really work is an experience like no other. But in between those moments are others that will test anyone’s spirit: necessary but tedious grunt work, sudden inspirations that come to nothing when tested, realisation of looming troubles that will have to be fixed (often with little idea of how to achieve that), and the occasional outright crushing failure at a key moment.

There is no small number of suicides in the history of chemistry graduate studies, along with less-noticed suicidal thoughts, attempts, partial breakdowns and bouts of depression

It has to be said that different research groups have different cultures. Some make it easier to succeed, or at least survive, but others definitely do not. And while every generalisation has its exceptions, there is a tendency for higher pressure environments where more famous (or ambitious) professors are involved. It’s easy to see why this might be so. Big-name professors generally have a strong selection of potential students and post-docs to choose from, and anyone who joins is expected to help maintain the reputation of the group by contributing to tough, ambitious research projects. The tradition in organic chemistry has been to do this (at least in part) through long, long hours: days, nights, weekends and holidays with as little time off as possible. Not everyone has a personality that is a good fit for this (and nor should they!). Many prominent group leaders, on the other hand, have personalities that demand high performance (and constant presence at the bench) no matter what you might feel about the atmosphere.

This has sometimes led to tragedies. There is no small number of suicides in the history of chemistry graduate studies, along with less-noticed suicidal thoughts, attempts, partial breakdowns and bouts of depression. Even the brightest and most accomplished can find themselves wondering if they’re up to the job, or if they’ve perhaps made a serious mistake with what they had thought would be their life’s work. Some come out of this experience stronger, but others are damaged by it, and anyone who’s been through a graduate program will have seen examples of both.

There’s room to believe that all this is changing a bit. More and more younger professors are at least paying lip service to the idea that the Old Guard methods of running a research group aren’t necessarily the style to aspire to. And some of those older professors themselves are seemingly mellowing with age, leaving former group members telling stories about how tough it was ‘back in the day’. There seems to be more realisation that taking an occasional break from the lab every so often can actually clear a person’s mind for a fresh approach to a scientific problem. With any luck, there may also be some recognition that there are many different styles of thinking and of work that can all contribute to a research effort, and that not everyone has to be a hard-charging 20-hour-a-day dynamo at all times.

But even so, there is surely no way to keep graduate work from being (at least at times) stressful, difficult, and challenging. It would have to have some combination of those to be worthwhile, because solving worthwhile scientific problems is often all three of those things. The universe does not care about what we might go through to uncover its secrets. As human beings, though, we owe it to ourselves and to each other not to make things harder than they need to be. A young scientist should finish a degree tired but happy, not depressed and wondering where they went wrong!