A can-do attitude and some lateral thinking can save time and money when it comes to exotic apparatus, says Derek Lowe

We chemists really don’t have very much to complain about when it comes to our normal lab equipment. Ground glass joints and the like have been standardised for a long time now, and most of what’s out there is perfectly fit for our uses. I did once come across a cheap line of round-bottom flasks whose weirdly thin walls made them resemble Christmas ornaments, but for the most part, one piece of glassware has served me just as well as another.

And the design of the basic kit has been hard to improve on as well. The Dean–Stark trap and the Soxhlet extractor, for example, have never really changed, because they’re so near perfection as is. People do try, though – I recall an attempt to replace the classic separatory funnel with a glass-plunger gizmo that only drained out the top, for example. I don’t know what the hopeful manufacturer had named it, but it should have been called the Emulso-Matic, and I soon gave up on it. (The fact that it would only fit well into its own bespoke holder did not endear it to me, either). More recently, I’ve been seeing several examples of new devices designed to quickly evaporate multiple small flasks and vials. Their makers have perceived a gap between the good old rotary evaporator and the larger centrifuge-vacuum pump devices, and they might be right. 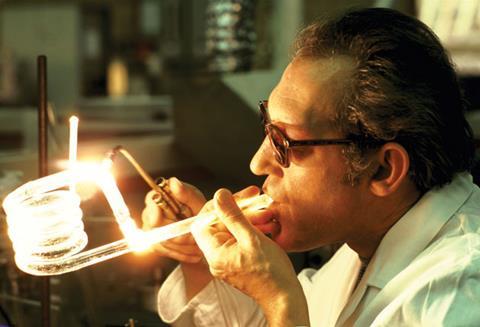 But there are still times when we need to rig something up ourselves. In academic settings, this is usually because a perfectly good piece of equipment exists, but the lab has never been able to afford one. Industrial chemists can usually buy what they need, but they may not have the time to wait for it to arrive, or (more likely) they may have found that their existing model has been stored where no one can remember it, or pilfered from their own lab drawers by unknown hands. These situations arise when there’s some procedure that isn’t done very often, but is a perfect fit for the occasional application. Sublimation is an example of a not-so-common technique that’s made much easier by specialised glassware, but can also be performed by homebrewed apparatus. Photochemistry and bulb-to-bulb distillation are in the same category.

Some time and thought, along with some miscellaneous glassware and some spare tubing, can often provide a workable solution for the short term. And if things work well enough, you might be able to make the case for buying the real thing. If you still have a friendly glassblower available, you might then be able to realise whatever odd glassware dreams cross your mind. Many of these folk, tired of fixing star cracks and the like, jump at the chance to put together something interesting.

Sublimation is much easier with specialised glassware, but can be performed with homebrewed apparatus

But for non-glass items, you may need to expand your lab supply horizons. While on my postdoc in Germany, I found myself doing some photochemistry (with the proper quartz apparatus, I should add). But I needed to circulate some exotic wavelength-cutoff filter solutions through the cooling jacket, and we had no pump for that sort of job. I could order one, I was told, and it might even arrive in as little as two weeks. That was about two weeks longer than I was prepared to wait, so I drove down to the local pet store and bought a small aquarium pump, which worked perfectly. Since I had a reputation to uphold as a crazy can-do American, I decorated the whole rig with the colorful tropical-fish-covered cardboard box, which came in handy when it was time to explain just how I was running these experiments so soon after being given the paperwork for a new circulating pump.

And just recently, I came across a procedure that called for the reaction to be filtered through polyester fibre. After devoting some thought to that, I walked down to the nearest store that sold towels and bedspreads and such, and purchased the cheapest pillow on offer. It proved to be full of all the polyester fibre I will ever need in the lab, and probably much more. I will gladly part with some of it for a slight discount to the standard catalogue price.