The apparatus that started a chain reaction of chemical discovery 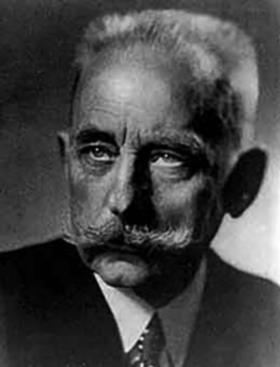 In 1983, Swiss artists Peter Fischli and David Weiss unveiled a weirdly surreal film in which objects fall over, roll, catch fire, swing, pour, fizz, and flip for a mesmerising 30 minutes. Entitled Der lauf der dinge (The way things go) it spawned a host of imitators, and is a metaphor for an idea that first came to a German chemist whose work underpins modern chemical kinetics.

Max Bodenstein was a student with Viktor Meyer, the organic chemist who devised a simple method for determining vapour density. Bodenstein had hoped to be set a project involving lots of brightly coloured compounds; instead, Meyer set him the rather less glamorous problem of understanding the decomposition of hydrogen iodide. It would be a task that would set him up for life.

Working with sealed tubes containing different ratios of the acid, hydrogen and iodine, Bodenstein heated them until they reached equilibrium. After freezing the tubes in a low temperature bath, he could determine the amounts of each component. His study was among the first to confirm the law of mass action, the equilibrium law that had been proposed by Cato Guldberg and Peter Waage some 30 years earlier.

His next destination was Leipzig, where Wilhelm Ostwald was putting chemistry on a quantitative footing. Bodenstein began to work on the kinetics of hydrogen iodide, establishing the rate law. But hydrogen bromide was quite different. In deriving the rate law, Bodenstein made the simplifying assumption that the concentration of the intermediates was small but constant – the steady state approximation that every undergraduate learns today.

As Bodenstein’s research developed, he began to use more sophisticated apparatus to handle gases, as did many of his contemporaries. One of these was the spectroscopist Erich Ladenburg, the son of the organic chemist Albert Ladenburg, who proposed a prismatic structure for benzene in 1873. The younger Ladenburg was interested by ozone, a molecule whose deep blue-purple colour had attracted attention ever since its discovery by Christian Friedrich Schönbein in 1840.

The extreme reactivity of ozone meant that the use of mercury for pressure measurement was out of the question. Other chemists had typically put a drop of oil or sulfuric acid at the top of the mercury column, but Ladenburg wanted an absolutely clean system. With his student Erich Lehmann, he devised a glass variant of the revolutionary Bourdon pressure gauge. They attached a flat glass tube, bent into a U-shape, to their reaction apparatus. The sealed tip of the tube approached a horizontal reference needle. When the system was evacuated, the gap between the tube and the needle changed and was measured using a small microscope. The new gauge was robust and reliable, and with it Ladenburg and Lehmann published a key study in ozone spectroscopy.

Bodenstein began to use this principle in his own experiments. He constructed a gas cell equipped with a looped capillary of quartz and a reference needle. The tips would peep out of the furnace and their separation could be monitored as the reaction progressed. This required tough glassblowing, which Bodenstein insisted was done by his students. Shortly after George Kistiakowsky joined the group, Bodenstein looked closely at his new student’s gleaming vac line. Smelling a rat, he asked him who had made the line. When Kistiakowsky sheepishly replied that it was the glassblower’s work, Bodenstein said ‘No student of mine will have the glassblower build their apparatus!’ and smashed it to pieces with his cane. Kistiakowsky would go on to become a legendary glassblower (and US President Dwight Eisenhower’s science advisor).

This was not the only variant of the pressure gauge. In 1908, the Canadian chemist Frederick Johnson twisted the flat tube into a spiral and attached a small mirror at the bottom. When the system was evacuated, the mirror twisted round, acting as an optical lever to amplify the movement. By adjusting the pressure outside the spiral, the device could be used as a differential manometer sensitive to fractions of a torr. Johnson’s device is sometimes referred to as a Bodenstein or spiral gauge.

Bodenstein, meanwhile, had moved on to the explosive reaction of hydrogen with chlorine. The reaction seemingly violated Albert Einstein’s recent principle of quantum equivalence that one photon only acted on a single molecule – instead, here one photon generated hundreds of hydrogen chloride molecules. While talking in the lab to his graduate student, Walter Dux, in 1913, Bodenstein – always impeccably dressed and in white spats – fiddled with his golden watch chain. He wondered aloud whether each atom produced by the light wasn’t simply the start of a linked chain of chemical amplification. In one casual conversation, Bodenstein had laid the foundation for a huge area of photochemistry.

But the chain had much further to run. In 1933, Leo Szilard a brilliant physicist who had worked with Einstein, fled Germany for England, fearing the rise of the Nazis. While crossing the street near the British Museum in London, he suddenly realised that the release of neutrons from the fission of a uranium atom could be turned into one of Bodenstein’s chain reactions, hugely amplifying the splitting process. Szilard had unleashed the atomic age.

There is some irony that in a century in which statistical and probabilistic approaches have come to dominate our understanding of the world, Bodenstein and Szilard provided the deterministic links that connected one atom with another. But for Fischli and Weiss, their installation was just a witty comment on our brains’ endless quest for a chain of causality. You just cannot be certain where that chain leads.

I am grateful to Tasnim Choudhury, whose photograph of the spiral gauge initiated this article.