The French inventor who knew when to let off steam

French engineer and manufacturer. Inventor of the pressure gauge

Measurement involves little rituals and gestures. When I was a child, my mother would shake our thermometer violently before taking my temperature. In a world that has gone over to digital sensing, where labs are dominated by reassuring beeps, such gestures are almost forgotten. But there is one hold-out: tapping the faceplate of a pressure gauge. It is a reminder of a time when measurement was largely mechanical, and its persistence is a tribute to the ingenuity of French instrument maker Charles Eugène Bourdon. 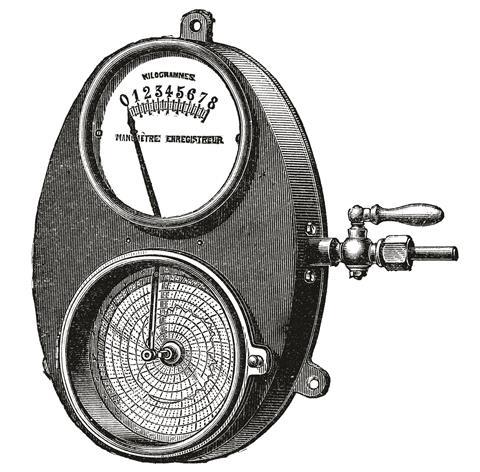 As a child, Bourdon was sent to the Lycée Bourbon, the elite school on the right bank of the Seine in Paris founded by Napoleon in 1804. It was particularly fashionable with progressively-minded parents because of its wide curriculum and liberal ethos; the list of its alumni is a who’s who of the 19th and 20th century from industrialists to scientists, philosophers and painters. Around the age of nine, in 1817, Bourdon wowed his classmates and teachers by building a hand-cranked device to reel silk from the cocoons of silkworms that he raised himself. No doubt he fed the insects on the leaves from the mulberry trees that had been planted in their thousands following Joseph-Marie Jacquard’s invention of the mechanical loom (referred to by the wonderful onomatopoeic name ‘bistenclaque’) and Napoleon’s drive to develop the silk industry in France.

But the young Bourdon’s aptitude for machines was of little interest to his father, who simply wanted him to get a job. As a result, when he graduated his father shipped him to Nürnberg in Germany for two years to learn the language. When he returned to Paris he was employed by a silk merchant, a job that Bourdon probably loathed. When his father died in 1830, Bourdon quit his job and found work with an optician, then worked unpaid for a spell with the high-profile engineering firm of Francois-Etienne Calla, which specialised in mechanical tools and steam engines.

Soon, Bourdon set up on his own in the Rue Vendome in Paris. He made his first splash by building a glass model of a steam engine that earned him a silver medal from the French Society for the Promotion of Industry. At the same time he was beginning to build steam tractors (locomobiles) and taking out patents for condensers, valves and control devices. As his business expanded, he moved to larger rented premises in the Faubourg du Temple, not far from Place de la Republique. The story goes that it was here, just as an engine was being readied for delivery, his foreman found that a lead spiral condenser tube had been deformed. With the delivery date imminent, there was no time to build a replacement part. Overseeing the repair himself, Bourdon decided to reshape the tube using water at high pressure. As the pressure rose, however, rather than the cross-section simply becoming circular, the spiral as a whole began to straighten.

Bourdon wondered what would happen if he used a tube made from a stiffer, elastic metal, and quickly set up an experiment with a curved tube of thin steel, sealed at one end. He must have been delighted as it straightened as the internal pressure rose, then returned to its original shape when the pressure was released. Up to this point in time, the only means of knowing the pressure for someone operating a steam boiler was to listen to the hissing and feel the stiffness of a spring-loaded valve. Unsurprisingly, there were explosions, and steam engines were viewed by some with distrust. Now there was a simple and robust way of establishing the pressure difference between the inside of a boiler and the outside air.

In his workshop, Bourdon devised a gauge. Inside, the sealed end of the tube was linked through a pair of levers to a needle mounted on a pin. His patent of 1849 shows several designs, from the simplicity of an omega-shaped tube with a single link to the needle, to spirals linked by small toothed wheels. Unbeknownst to Bourdon, Rudolf Eduard Schinz, a German railway engineer, had discovered the same effect in 1845 and, having obtained a Prussian patent, had started to install them on locomotives; surprisingly there never seems to have been a dispute between them.

Bourdon persuaded Jules Richard, a Lyonnais barometer maker, to move to Paris and produce the his design. Their robust, linear gauges sold like hot cakes and Bourdon was able to buy the lease on his workshops and expand it. The partnership exhibited the gauges at the Great Exhibition of 1851 and Bourdon was made Chevalier of the Legion of Honour in the same year.

Even as his business grew, Bourdon remained an instrument maker at heart. He had a workstation in his workshops and seldom strayed far from his lathe and glass-blowing torch. He continued to build all manner of gadgets, including anemometers that caught the wind on the Paris Observatory for decades. He continued to work long after he handed over his business to his children. In 1884, while measuring the effect of wind on steam locomotives, he fell from a moving carriage. He hit his head and died peacefully, surrounded by his family, some hours later.

But his gauges endure. When I got an email from our compressed gas supplier recently, offering me web-connected digital regulators for my cylinders, I thought about my regulators and their pairs of Bourdon gauges. ‘What more could I need?’ I replied. His reply came swiftly. One word: ‘Luddite’.