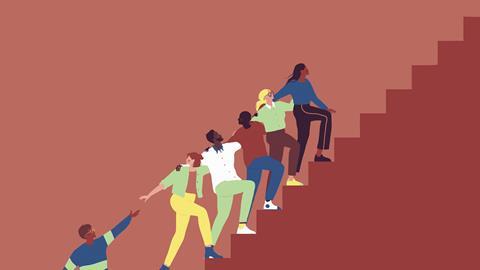 Challenging diversity in favour of equity

Why a seat at the table is not enough

This June, I attended the 71st Lindau Nobel laureate meeting. Each year, the conference brings together young scientists from all over the world with Nobel laureates of a dedicated discipline, chemistry in this case. Many of them experienced the conference as one of the most diverse they ever attended. Indeed, many attendants belonged to structurally marginalised groups in science, such as People of Colour, people from the Global South or LGBTQ+ people.

However, diversity did not go far beyond the selection of participants. The overall setting, statements made in discussions and the selection of speakers failed to promote inclusion. These issues were raised during a panel discussion on the last day on the ‘Diversity challenge’, evoking questions about diversity in science in general.

Diversity has been a buzzword in the past couple of years and I appreciate the broader awareness about the injustice of discrimination. Indeed, the scientific community started to realise that scientists and, hence, science can be biased, opposing the long-standing notion of science as a purely factual, objective discipline. Biases are transmitted into the selection of study groups, the interpretation of results or hiring practices. Biased facial recognition technology, inherited from its mostly white, young male programmers is a common example.

Nevertheless, the discussion about diversity often stays superficial, not accounting for the consequences and needs of diversity. Just as important as bringing diverse people to the table, we need to ensure they have a say and listen to them. Everyone should feel comfortable and confident to participate – not just be there. For real inclusion, we need to implement accommodations that allow equal participation for a heterogeneous group of people. Additional actions, such as re-labelling bathrooms as unisex, using gender-neutral language or providing specially trained people to be consulted if someone feels discriminated against can make a sustainable difference.

Tokenism underestimates the potential and capabilities of people

In addition, by just diversifying the selection of participants, we are at risk of tokenism. Here, a person is invited not for their expertise but to embody a symbol for diversity, indirectly exploiting their experience of discrimination. An example would be the one female professor in the institute who has to attend all board and committee meetings to prevent such groups consisting entirely of men. This results in a dilemma. On one hand, the female professor might want to be a role model and use their acquired access to these structures to make a change. On the other hand, it means additional and often unappreciated work. This happens constantly to people who are perceived as diverse and have to represent their entire community as diversity experts. Tokenism underestimates the potential and capabilities of people. I don’t want to be part of a scientific conference because I am Black or female and I have an (assigned) expertise in diversity, but because I am a good scientist.

Diversity needs to be perceived in the context of discrimination to provide a sustainable change and equity in academic culture. A diversity statement with a picture of some People of Colour, dressed in their traditional, ethnic attire, does not do justice to the people who were previously excluded due to structural discrimination. Marginalised people fight against (un)conscious bias and (non-)visible barriers every day of their life. The amount of energy that goes into sustaining themselves or having access to fields they were traditionally excluded from is immense. From an outside perspective, this might not show, but studies on the prevalence of depression in discriminated people show that this additional work takes its toll.

Therefore, allies who really want to promote inclusion should not be deterred from the additional effort. It is small compared to the time that individuals spend fighting structural discrimination. The title of the Lindau session, ‘Diversity challenge’, describes the problem in a nutshell: People that have been excluded from certain aspects of science are fighting daily for appreciation, representation and fair treatment. On the other hand, people who have unquestioned access see the lack of diversity as a challenge, an obstacle to overcome.

Reframing this challenge as an opportunity, due to the supposed gain in knowledge, perspective and competitiveness of a diverse team, only increases the pressure on marginalised people by expecting them to be extra creative or bring unheard-of ideas. Discrimination and oppression have long been entangled with capitalism and colonialism, which makes it even more alarming when diversity is supposed to fuel competitiveness and productivity. Instead, inclusion, equal rights and reasonable accommodation are human rights and must be pursued in any case to grant equity and reparation.

We need inclusion to make amends for the discrimination and exploitation of marginalised groups. But the discrimination will not end in one day. That is why a real ally should be prepared and willing to accommodate the needs of people that fight for their survival and existence on a daily basis.

The Council for the Lindau Nobel laureate meetings believes that diversity and inclusion are essential for future success. At this summer’s chemistry meeting, the participants, about 500 young scientists, consisted of 45% women, and came from 90 different countries. There was diversity in this regard. However, the Nobel laureates were mostly white men. This is the result of historical norms and bias that unfortunately still rule in society. Science is male dominated. This is starting to change, but a lot remains to do. Universities around the world must work to give everyone the same opportunity to develop a scientific career. With progress on this, Nobel laureate diversity will increase. But it is slow, and the Lindau participants are important to nurture. They are the future scientists that may be awarded Nobel prizes.

Ahead of the 2022 Lindau chemistry meeting, we introduced a Code of Conduct to which all participants must agree to adhere. We also organised a panel discussion around inclusion and diversity at a prominent spot in the program. This session resulted in a lot of engagement from participants; clearly, events like this will become permanent in future programmes. There was one serious mistake in the programme, which we deeply regret. The sessions where young scientists had active parts were not diverse. Assuring diversity in those sessions had been unintentionally neglected, which we as chairs take full responsibility for. At the second summer meeting, economics, we introduced an ombudsperson to whom participants could turn with complaints, and gender pronouns could be added on name badges.

The Council welcomes suggestions. We learn from the participants’ feedback. At its next meeting in October, this topic will be a major point on the Council’s agenda. We want the participants to get a fantastic experience that inspires, encourages, and supports them towards future scientific careers.

Further links to scientists elaborating on their own experience belonging to marginalised groups:

How to introduce diversity in Stem teaching material (it all starts with education, after all):