‘Chemists dismissed us as being too biologically focused’ 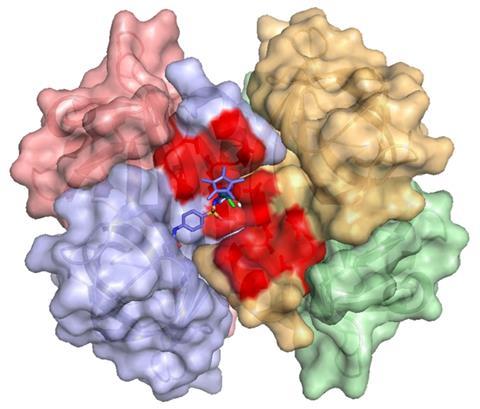 This artificial enzyme consists of a protein – streptavidin – and an organometallic catalyst anchored in its active site. The amino acid residues subjected to directed evolution have been labelled in red.

I still remember our literature group seminar three years ago. It was a Monday morning in late September when we started by discussing the upcoming Nobel prizes. Many names and research areas were bandied about that day, but one was mentioned more than any other: Frances Arnold. She has always been known as the mother of directed evolution of enzymes and her seminal work has inspired many research groups around the globe, including my own.

Working to develop artificial enzymes and performing directed evolution was part of my daily routine. Research groups working on directed evolution have been expecting Arnold’s work to receive the Nobel nod for years, especially after she, together with Willem Stemmer, were awarded the 2011 Charles Stark Draper prize.

The immense diversity of enzymes, nature’s catalysts, is the result of the huge diversity of life living in every imaginable niche. This vast range of environments – each of which offers its own unique challenges – has given natural evolution the chance to hone enzymes for a huge number of jobs over the course of billions of years. To mimic this natural process was Arnold’s genius. Her work saw evolution harnessed on a much shorter timescale in a laboratory set-up using step-wise, repeated cycles of mutagenesis combined with high throughput screening methods to accelerate enzyme discovery.

The fascinating field of directed evolution of enzymes and proteins emerged only relatively recently in 1993. By combining the attractive features of molecular biology, chemistry and protein engineering, it meant enzymes could be improved or given entirely new properties. Enzymes can now be created that can tolerate organic solvents, perform entirely new type of chemistry unseen in nature or be made tough enough to survive the harsh environments found in industrial biocatalytic reactors.

The interdisciplinarity of this work means that many different scientific fields are interested in getting in on the act of evolving proteins for their own purposes. For instance, the field of artificial metalloenzymes grew with the aid of directed evolution to produce entirely new protein scaffolds capable of accepting a synthetic inorganic catalyst into their active sites and catalysing more new-to-nature reactions.

Soon after having started my PhD I realised that trying to explain my research topic to an outsider, even to a chemist, was a challenge. Mentioning that I was working in the field of artificial metalloenzymes, optimising their activity and selectivity by directed evolution, always raised a few eyebrows at conferences.

Consequently, I have always felt like an outsider – not a real member of the catalysis chemistry community and at the same time not at ease among the synthetic chemists or molecular biologists. I wasn’t alone either. My colleagues have had similar experiences. Chemists dismissed us as being too biologically focused. Molecular biologists would shake their heads at the amount of chemistry. And catalysis scientists would say that enzymes were too fragile to be used on a larger scale.

The spotlight a Nobel prize shines on a field brings new researchers in, so we can now expect quicker progress, bringing unforeseen developments, methods and applications. As more and more researchers join the effort to mimic nature’s unravelled catalytic abilities chemists will come to accept that molecular biology is actually applied chemistry.

Increasing interest and competition in a field is always stimulating, both for researchers and results. Directed evolution is still in its infancy and only two decades old but it has been transformed from being strictly about basic research to a widely applied technique finding use in industry. I now expect the field to start growing rapidly – similar to what happened to supramolecular chemistry and molecular machines after this area won the prize two years ago.

The current attention paid to directed evolution has made me feel like my work, and the four-and-a-half years I spent on my PhD, is finally paying off. Thanks to this year’s Nobel prize in chemistry, my own research feels more important than ever before.