Purifying the most involatile of liquids 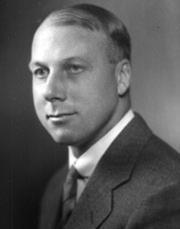 Innovation is all the rage in our financially troubled times. At the heart of it is a creative impulse as powerful as that of the artist. Yet while the latter is a romantic, tragic figure, lionised on stage and screen, the inventor is treated either as a figure of fun, or as the dangerous purveyor of dystopian nightmares. The reality is always more complex and interesting.

Kenneth Hickman was a bit of both. Born in London, he developed an interest in science in part through photography. After spending a year studying at a ’crammer’ school, he sat the scholarship exam for the Royal College of Science in South Kensington, which he joined in 1913. The chemistry course was taught in part by the highly competent but straightlaced Martha Whiteley. Hickman, who was a frenetic practical joker, played a series of pranks on her - letting off a huge smoke bomb during a lecture, fireworks in the lab and lacing her drink with phenolphthalein - which ran the risk of getting him expelled from the course. He was only saved by his enthusiasm for chemistry and a ’boys will be boys’ attitude on the part of Sir Edward Thorpe, the head of department.

At the outbreak of the first world war in 1914, he was ordered to join a military research station testing flares, incendiaries and explosives - ironically under the guidance of his college nemesis, Whiteley.

He returned to civilian life in a junior position at the Royal College, where he studied photographic chemistry. By his own admission, his experiments in colour photography were an almost complete waste of time, but he came up with simple and inexpensive shortcut methods that he patented, hoping to hit the big time with one of his ideas. He spotted that the survival of a photographic print depended on how well excess reagents were rinsed away. Tinkering in his small laboratory, he developed a continuous washing tray equipped with an air-driven rocking device based on two bladders, along with a glass siphon that would periodically empty and fill the tray. It was coupled with an electrical circuit based on a Wheatstone bridge (see Chemistry World, December 2011, p68), which would howl unpleasantly until the conductance dropped. Something of a showman, Hickman arranged for a local shop to put it in their window, until the police had to move along the many gawpers.

His career as a chemist, however, was going nowhere. On something of a whim he applied to work at Eastman Kodak’s US headquarters. On arrival, he was simply told to find himself things to do. In spite of this unpromising beginning, he began by selling Kodak his patent for the rinsing device, and, by building a variety of helpful gadgets, earned himself a reputation as inventor in residence. The hallmarks of his solutions were simplicity, energy efficiency and low running cost. He recovered silver from both production and development waste, saving Kodak millions of dollars a year and substantially increasing their profitability.

But it was the search for a way to dry film stock that led to his experiments with diffusion vacuum pumps. Wanting to replace the mercury, he hit on phthalate esters as pump oils. To purify these most involatile of liquids, Hickman designed what he called a ’vacuum alembic’, a molecular still in which liquid evaporating from a heated pan condensed on a cooled upper surface and drained through a tube to an external flask - in essence a rediscovery of the ancient Mongolian still. But for more thermally sensitive mixtures, Hickman contrived a new design where a thin film of descending liquid was heated to a precisely controlled temperature; each component thus vaporised alone without risk of pyrolysis to the bulk. The residue could then be recovered and passed through the hot zone again to remove the next component. To test his designs, he distilled cod liver oil. To his delight, he found that he could purify vitamin A. Modified into enormous centrifugal variants, his stills started an industry for pure fats, oils and vitamins. 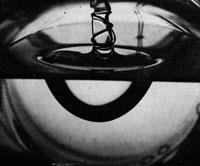 Hickman was fascinated by surface tension and dancing liquid ’boules’

But Hickman never profited from his stills, and he left Kodak to become an academic at the Rochester Institute of Technology where he used high speed photography to investigate the dynamics of boiling. Hickman was captivated by ’boules’, the beads of liquid that scud across the surface of a cup of tea as the bag is lifted away, or that dance ephemerally in a solvent still. Hickman’s method for keeping boules stable appeared in Nature in 1964; it is pure Hickman - enthusiastic empiricism backed by simple theory and superior glassblowing.

Like so many inventors, Hickman changed the world, renewing the familiar and making the new recognisable. A role model right for our uncertain times, Hickman was, in his own words ’just the sort of crook we need’.