Sooner or later, everyone has to grow up

Sooner or later, everyone has to grow up. In all societies and professions, rituals abound to celebrate the moment when a young person steps over the threshold. There are trials of strength or endurance, scarification or inebriation, or simply a big party. What about for a chemist? Is it really that final viva voce  examination, where the candidate faces a tag team of tormentors? Or the graduation ceremony, where everyone prances about wearing anachronistic garments and impractical headgear? Perhaps there is a less formal, but no less significant, moment in a chemist’s life: the Trial by Rotavap. 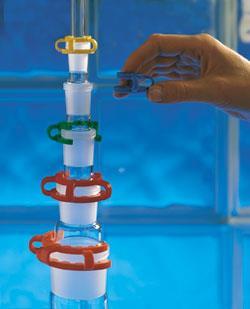 Different sizes of Keck clips are clearly distinguished by colour

We all know it. You take a valuable ether extract to the rotary evaporator after a maddeningly tedious afternoon of prolonged reflux. You place it on the waiting joint. Deftly you turn on the pump, close a tap, and set the flask spinning. And then, to your horror the flask spins off, consigning your product to the warm bath below - cue a chorus of braying laughter from your peers. Blushing, you extract several litres of hot water to rescue your product from oblivion, and try again.

For all their incredible convenience and versatility, standardised Quickfit ground glass joints have an annoying tendency to pop open. Wire loops, little glass horns, springs, rubber bands - all of these have used over the years in an attempt to keep them securely fastened. Metal clips were also available, but rummaging around in a drawer of silvery gadgets was maddening. Then came the Keck clip. 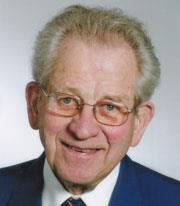 Hermann Keck was a born fiddler. Throughout his childhood, he took things apart to see how they worked. Born in 1919, in Treysa in the central German state of Hessen, he lost both his parents by the time he was 16. In 1935, the year his father died, his grandfather took him to the Deutsches Museum in Munich where he was instantly hooked by the machines and engines.

With the start of the second world war, Keck was drafted into the armed forces. He served, largely unscathed, until the end of the war when he was interned in France. The camp was a cold, damp and tedious place, but a new world opened when a family friend posted him a copy of Riesenfeld’s Anorganische Chemisches Praktikum, which he read voraciously. His readings led to long conversations with older chemists interned with him, and his studies so impressed the camp commander that he was allowed to read in a warm and well-lit room.

Upon his release, he got a place to study chemistry at the Philipps University in Marburg where he did his PhD research on siloxenes with Kautzki. He was then hired by Degussa in Hamburg and later moved to Zug in Switzerland to work for USI. Switzerland was a congenial place and he adopted Swiss citizenship in the 1970s. When USI moved their operations, he got a job with Sandoz in Basel making dyes and water softeners.

But while life was interesting, there was something missing. He tinkered and fiddled around with ideas. Starting in the 1970s he began patenting a number of gadgets: brakes for skis, an intra-uterine contraceptive device, a protective plastic suit.

But it was in 1980 that he had his real brainwave - a clip to hold ground glass joints together. The device consisted of two parallel ribbed arches with a series of C-shaped links in between. Instead of metal he used brightly coloured plastic to make each size instantly recognisable - from the tiny B10 to the huge B45. As he showed his devices at trade fairs he immediately began to receive orders, and his small company went from strength to strength. Alongside his joint clips he soon designed hose clips, connectors and simple gas flow controllers.

The business flourished and Keck continued to run his company well into what others call old age, travelling the world and spreading his design to labs everywhere. It was only in the late 1990s that he decided it was time to pass his devices on. He sold the patent rights to glassware firm Schott, and in 2008 dissolved the company he ran from his house in Therwil, near Basel, settling down to a well-earned retirement. He turned 90 last month.

His clips are now universal, and have saved many a chemist from disaster by rotavap. But above all, their delightful toy-like qualities take us back to the happy days of our childhood. They remind us each day of the reason why synthesis is so much fun: it’s play time, and Keck clips add much needed flashes of colour to our often drab playrooms, with a satisfying ’Keck’ sound when we snap them into place.

Thanks are expressed to Susanne Wentz-Keck for invaluable assistance