Do you remember that spectacular reaction that ensnared you into science forever? A recent Last Retort (Chemistry World, July 2009, p84) confirms the view that for most people this happens in primary school. While some are snagged by pretty colours, or the glinting facets of crystals carefully nurtured over weeks (a former student had a copper sulfate crystal that fitted quite snugly into a baby bath), others are inevitably attracted by the prospect of making really big bangs. Nowadays such pursuits are viewed at best with scepticism ('grow up') or worse with alarm ('if the bomb squad come out it’ll damage our school’s brand'). 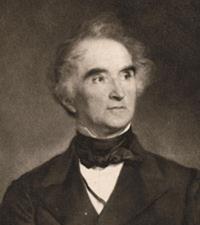 German chemist, 1803-1873. Educator, co-discoverer of isomerism, father of agricultural chemistry and inventor of the "Oxo cube", along with revolutionising chemical analysis.

One such explosion enthusiast was Justus Liebig, who was born in Darmstadt in 1803. The son of an impoverished pigment maker, he became obsessed with the hideously explosive compound silver fulminate. While he later claimed to have been fired from his apprenticeship with an apothecary for causing explosions, it is more likely that he left because his father could not afford the fees. At age 17, Liebig went to Bonn and Erlangen to study chemistry with Kastner. An extrovert figure, Liebig soon attracted controversy and left hastily in 1822, but not without having published his first paper - on the safe preparation of silver fulminate. Liebig moved to Paris and was soon working with Gay-Lussac, one of the leaders in chemical analysis. His chosen subject of analysis? Silver fulminate. What Gay-Lussac thought of the plan is not recorded, but Liebig was soon at work.

Explosions aside, analysis was then a character-building process. The available methods were slow and unreliable, and any hope of getting reproducible data required substantial amounts of material. Liebig’s first analysis involved 100g of fulminate – a staggering amount – and gave a composition of AgCNO, which he soon found to tally rather nicely with other fulminates.

Shortly after Liebig’s results were published, there was a report of the analysis of a rather tamer compound of silver, the cyanate. To everyone’s astonishment the analysis was identical. The author, one Friederich Wohler, had an equally illustrious pedigree, having studied with the Swedish analyst and theorist Jons Jakob Berzelius. Sharp exchanges of letters followed. Liebig was convinced that Wohler must be, if not incompetent, then just wrong. But Wohler stood his ground and careful experiments led them each to realise that they had different compounds of identical composition. Isomerism – the word coined by Berzelius – would lead, after many twists and turns, to the structural theory of chemistry.

At age 21, Liebig became professor at Giessen, close to home. By then, he and Wohler had become the closest of friends. When Wohler’s wife died, Liebig invited him to work in his lab. Wohler made a series of compounds, each with a benzoyl group – the first 'radical' or consistent grouping, which was soon joined by methyl, ethyl, and a host of others.

Central to this work was analysis, and Liebig had not forgotten the maddeningly cumbersome methods of his early years. Drawing on work by Berzelius and Döbereiner, in 1831 he published a new kind of combustion analysis. Less than a gram of compound was put into a hard glass tube alongside copper oxide and heated over a charcoal burner, resulting in the quantitative formation of CO2 and water. These then passed through a calcium chloride tube and on to the 'Kaliapparat' – a delicate piece of glassblowing perfected by his assistant Ettling, consisting of a five-bulbed tube bent into a triangle. The bulbs at the bottom held caustic potash (potassium hydroxide) to catch the CO2. At the end of the analysis, the end of the combustion tube would be snipped and the last of the gas blown through the bulbs.

Armed with a good analytical balance, carbon and hydrogen analysis could be done with utmost precision in a matter of an hour or so. The method was a triumph and students flocked to Liebig’s lab – indeed, most synthetic chemists can trace their lineage back either to him or to Wohler.

Liebig’s interests ranged widely. Aside from organic chemistry, he invented the sugar-based silvering process still used today, and made huge contributions to agricultural and biological chemistry, including the discovery of nitrogen’s role as a limiting nutrient. Some remember him for his extract of beef, which would be known as the Oxo cube. He never did, however, invent a condenser.

But Liebig’s interest in bangs never waned. An endearing lecturer, his demonstrations hooked a whole generation of students. Remarkably, Liebig got through his career with few mishaps and died at age 70. If you wish to emulate him, just make sure you’ve filled in a risk assessment form first.