Clearing the air about the hydrogen economy

Hydrogen as an important fuel is no pipe dream, says Martin Smith

Mark Peplow’s recent piece on the ‘False economy’ of hydrogen as an energy vector illustrates the dangers of opinion based on limited and selective information sources. There is relatively little public knowledge in the UK of what is being done globally with hydrogen and fuel cell (HFC) technologies – leading to an abundance of misinformation and those opining on it. 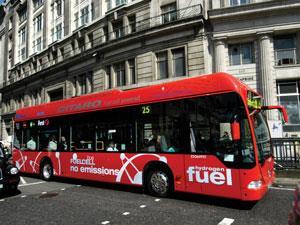 Batteries are better for transport?

As Peplow notes, funding for the US HFC programme was slashed in 2009. However, the US Department of Energy (DOE) had been led to believe that battery technology was on the verge of offering the vehicle ranges and recharging times needed for mass market sales. When this proved to be wrong, funding was returned to the DOE HFC programme, albeit quietly to conceal the politically embarrassing volte-face.

Existing battery-electric vehicles (BEVs) are ideal for short-range, predictable city-type usage. No vehicle will offer a better running cost per mile, but they are still far from being a direct replacement for conventional vehicles. Betting on when they will be is a gamble – with the US DOE having already lost a large stake. The UK Parliamentary Office of Science and Technology estimates that BEVs can realistically account for 1–10% of the UK vehicle market (assuming no step-change in battery technology), but what becomes of the other 90–99%?

Brown, green and blowing away

Producing H2 from natural gas (brown-H2) unavoidably emits carbon. However, compared to petrol and diesel, the intrinsic efficiency of fuel cell transport – even using brown-H2 – still represents a net carbon reduction per mile of around 30%. Green-H2, made from genuinely renewable electricity or bio-sources, is a true emissions-free transport fuel.

The best use of green electricity is to satisfy demand in the electricity grid, but when supply outstrips demand what happens to the potential surplus? If there is no market for it, that potential is currently wasted. This is particularly poignant in the case of wind energy, which has an almost negligible marginal cost. No sane person would make hydrogen from 20p per unit electricity, but making it from energy that would otherwise be lost is a different game. As UK renewables capacity increases, so do the opportunities to divert excess generation into producing and selling green road fuel. Decoupling energy production from its eventual use also helps in grid balancing – increasing the efficiency (including cost) of the overall energy system.

As a gas, hydrogen can be stored on almost any conceivable scale, from bottles to geological formations. In the US, depleted natural gas fields are already being used to store bulk hydrogen while the Germans and Danes are developing underground salt cavern storage. Surely this is better than storing CO2 – why produce and pay for storing something we don’t want, when we could store a fuel until we need it? And thus also enhance our energy security?

For vehicles, dense solid hydrogen storage would be ideal and there is much research into this, however ‘perfect’ is not necessary. Carbon-composite high pressure tanks worth up to 500 miles of travel are quite sufficient and are already being used in HFC buses and pre-production cars. The economics of making those tanks are well understood and the costs are acceptable.

A BEV charging station costs £1000–3000, whereas a green-H2 production and filling station would cost £1–3 million (scale dependant). However, each BEV will require several charging points: one at home and more around likely destinations. The main cost of each BEV point is labour (very few economies of scale) making the infrastructure cost almost directly proportional to the number of BEVs. Worse, extensive use of BEVs would require costly grid upgrades – particularly in low-grid strength residential areas. In contrast, one large HFC facility is capable of servicing a great many vehicles – the same cost-effective fuelling model we employ today. Any rational plan would see HFC facilities built on sites with existing high-strength grid connections. Most estimates of infrastructure costs suggest that HFC will be around £800 less per vehicle than for BEVs, even in early roll-out.

Having heard but seen little of H2 transport it may seem a fantasy, yet London has been running H2 buses for several years and has recently acquired more. Next year, Aberdeen will see Europe’s largest single deployment of green-H2 buses and work is underway in Scotland to develop the world’s first H2-propelled ferry. By 2015 the German state is on track to have 50 H2 filling stations, Japan 100 and the US even more. The EU has recently announced that the follow-on to its first HFC programme will be funded at €1.5 billion. That’s rather a lot of concrete and steel.

It’s a curious thought that multi-billion dollar investment from the likes of Mercedes, Honda, Toyota, Ford, Hyundai, Shell, Total, BOC, the EU, state governments and others is ill-considered. Is not the real ‘false economy’ forming opinion based on outdated news, selective facts and little understanding of the wider energy system?

Martin Smith is a senior researcher at the University of St Andrews, project manager of Delivery of Sustainable H2 and is involved in some of the projects described