Our current infrastructure for energy production and distribution is a house of cards built on fossil fuels, and it’s vital that we develop alternative energy sources.

But a few brave souls are working on something even more ambitious: ’alternative alternative energy’, which gloriously promises something for nothing.

The holy grail of free energy is a machine that achieves perpetual motion, running eternally, providing power and work at no cost. According to the most widely accepted laws that govern the universe, perpetual motion is impossible. The second law of thermodynamics dictates that as time’s arrow progresses, all systems will reach a state of increased entropy. An apparatus that produces work without energetic input simply cannot exist.

But the goal of perpetual motion is far too alluring for its seekers to be dissuaded by the cold harsh laws of physics. Since the middle ages, countless have tried and failed to achieve the impossible. Many early efforts toward perpetual motion used an overbalanced wheel, where one side is always heavier than the other through the course of a rotation. The heavier side is constantly falling, making the wheel spin eternally. While a lot of overbalanced wheel designs used swinging arms and other mechanical bits, there were also some designs that used the principles of chemistry.

Perpetual motion and alchemy are related disciplines of quack science, each full of mysticism and ineffable forces, and it will come as no surprise that early explorers dabbled in both. One plan for an unbalanced wheel dating from the 17th century sought a substance that would convert lightweight gases into mercury at the top of the wheel, causing it to spin. The mercury would be transmuted back into gas at the bottom, before rising again. Curiously, such a magical material was never found.

Another design for a perpetual motion machine used ammonia as an energy conduit. In the 1880s, British professor John Gamgee drew up plans for a ’zeromotor’. First, high-pressure ammonia was used to drive a piston upward. The expansion caused the gas to cool and condense, collecting in a pool of liquid at the bottom. Then the process repeated. Of course, if anyone had bothered to do the maths they would have realised that the machine consumed more energy in condensing ammonia gas than it produced, violating the second law. Apparently nobody did, as Gamgee was able to get the backing of none other than the US Navy for his device. A warship that used no energy to cross an ocean certainly would have been a tactical advantage.

In a curious deviation from normal policy, both the US and UK patent offices have acknowledged the impossibility of perpetual motion (the latter refuses applications outright, while the US merely requires a working model).

The most recent entry into the field of free energy comes from the Irish company Steorn. Last year, Steorn took out a full-page advertisement in The Economist  claming they had created a free energy device. The device is, according to Steorn’s website, ’based upon the principle of time variant magneto-mechanical interactions’. I think that means spinning magnets. Although this kind of announcement follows a long history of similar claims, and the machine cannot exist, nonetheless it demands an explanation. Steorn has invited independent scientists to help them to validate their device, a process they expect to conclude by the end of the year. 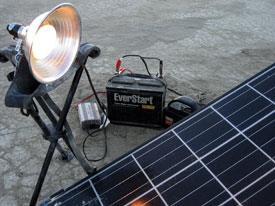 I just can’t wait that long - the world needs free energy now. So I have attempted to create my own perpetual motion device . It follows in a grand tradition that dates back to Old Testament times:

And thou shalt command the children of Israel, that they bring thee pure oil olive beaten for the light, to cause the lamp to burn always.  (Exodus 27:20, KJV)

In the Stiles Eternal Light, a desk lamp is aimed at a solar panel, which collects the light energy and charges a car battery. The battery is attached to a power inverter, running the lamp aimed back at the solar panel. Alas, preliminary tests suggest that electrical energy is woefully turned into heat; the car battery slowly discharges; and the light dies. I suppose I can’t patent it quite yet .