Time for a confession: whatever my merits as a scientist may be, good record keeping is not among them. This became clear to me during my academic days, since it was always more interesting to set up a new experiment rather than finish documenting an old one. I consoled myself by thinking that at least I wasn’t one of those people who scrawled half a reaction at the top of the page and wrote ’worked OK, I think’ underneath: my write-ups, when I finally got around to them, weren’t so bad. But once I started doing drug research, I had to contend with the other function of a notebook, which is a legal record to back up patent claims. During the part of my industrial career when I relied on paper notebooks and printouts, I continued to be atrocious at keeping up with my experiments. Things would eventually get completed, but the delays involved were the despair of the legal department.

But I am a changed man, thanks to technology. The electronic lab notebook (ELN) has made me into what I never would have gotten around to becoming on my own: an organised scientist. Structures are drawn on screen, stoichiometries adjusted, literature cited, reagents identified and sourced, the analytical data attached and cross-referenced - oh, it’s something to see. And over the years, I would rather have eaten sand than do all that manually - and I’d strongly consider ingesting a sand sandwich rather than go back to using paper now. The transition would be so painful that my documentation would surely end up being even worse than before. 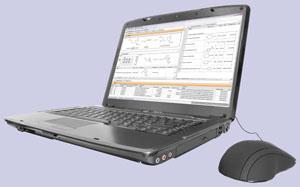 The electronic notebook changed my life

The feelings of a chemist who switches from paper to a well-designed ELN resemble those brought on by the first wave of chemical drawing programs, which began to take over the world in the early-to-mid 1980s. I was in graduate school at the time, and you really had to have been there to know what I’m talking about. I had just finished putting together a presentation for my continuation exam using plastic tracing templates, rub-on transfer letters, and what felt like an entire roll of transparent tape. But I felt like a Neanderthal pounding a rock as I watched structures copied, pasted and resized in front of me, and I knew that I had to have this program immediately. Some software is capable of selling hardware all by itself.

It’s not like these advantages hadn’t occurred to anyone before. It’s just that (at first) the technology wasn’t there, and then it took the legal department a while to catch up. I recall looking at the shelves of notebooks up on the wall in my graduate school group, thinking that there must be lots of interesting stuff buried in them, but our group’s lone computer wasn’t capable of rendering any of it into electronic form, and neither was I. Years later, the first industrial ELN I used was a frustrating hybrid. It had all the advantages listed above - until it came time for the legal signature and witnessing. That, the lawyers insisted, had to be done by hand, in black ink, on a paper printout, taped into a paper notebook. This was then microfilmed and stored on a shelf.

The field has fortunately moved beyond that, into the world of digital signatures and electronic witnessing. Every drug company that can possibly afford it uses ELNs in the chemistry labs, and in that sentence the remaining problem becomes clear: money, of course. Academic labs have seen much less widespread adoption of the new technology, and in almost every case, the cost is the sticking point. I believe that this logjam is beginning to break up as more software appears, some of it open-source. Wiki-creation software and some blogging platforms often do something similar to what people want from an ELN, so some of the functionality is now easier to obtain.

The usual electronic record-keeping problems still apply, though, chief among them file formats and archiving. No one wants to store their data in someone else’s proprietary format, for fear of it becoming unreadable in a few years. It’s a lot to ask, but what the scientific world could use would be a ’common notebook standard’, a minimal but usable format that every electronic notebook could export to in a pinch. And no, I certainly don’t feel like writing one myself - but someone should.