In the pharmaceutical business, our work absolutely lives and dies by assay results. Every step of the whole process is driven by another round of numbers: did the compound bind to the target? How tightly? Did it bind to anything else? Did it work in cells? In whole animals? While not doing anything else to them? For a long enough period? We’re either waiting for the last round of assay results or working on things for the next round; there is no third state of being in a drug discovery project.

So with that in mind, we have to be very careful about what assays we run and how we run them. ’Garbage in, garbage out’ is a rule of nature fearsome enough to live up in the lightning-bolt-throwing Pantheon with the laws of thermodynamics. Ignore it at your peril! The latest (public) example of this is the flap over sirtuin assays, potentially a set of very interesting pharmaceutical targets for everything from diabetes to old age. Sirtris had reported a number of compounds as modulating sirtuin activities, and indeed, the company was purchased outright by GlaxoSmithKline (GSK). But several reports have called the original assay system into doubt, with data suggesting that the fluorescent tags used in the assay alter the activity of the tagged peptides, leading to false positives being observed when Sirtris’s experiments are replicated. When the assays have been reworked to avoid the fluorescent tags, the activities tend to disappear.

How much of a problem this is for sirtuin research (or for GSK) is an open question, and you can get any answer you like if you call the right people. Given the biological interest and the amount of money GSK paid for Sirtris
(?362 million), finding a disinterested party is not a trivial matter. But what almost everyone can agree on is that it’s definitely a problem for that particular assay, and it’s not one that’s unheard of either. Proteins and peptides are routinely tagged with all sorts of extra features to make them detectable and purifiable, but no one ever does it without a slight feeling of unease. And that feeling should (in a competent researcher) always lead to a set of assays designed to make sure that adding these tags hasn’t altered the system in unexpected ways.

This time, it really works

Fluorescent tags and the like have been with us for some time, but there are newer systems that are sure to go through their own growing pains. Recently several groups have taken to ’bar-coding’ test molecules with stretches of DNA, taking advantage of the remarkable powers of molecular biology for detection and amplification of ridiculously small amounts of oligonucleotides. Such systems could allow for vast screening libraries to be dealt with - in fact, I’ve seen presentations mentioning compound collections whose sizes well exceed the total number of synthetic molecules officially described in the chemical literature. Without DNA amplification and sequencing technology, a library like this would be a uselessly huge artefact - but with it, actual results might be had. It would be the second coming of combinatorial chemistry and could come with a suggested advertising tag line: ’this time, it really works.’ 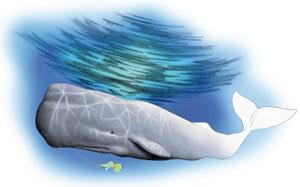 But does it? Well, as mentioned, I’ve seen results presented that I have no reason to doubt. But mentally, I have trouble getting past the picture of reasonable small molecules attached to the oligonucleotide chains. It seems to me like tracking the members of a school of fish by tying each one to an instantly identifiable whale, but that may well be a failure of imagination on my part. Still, small molecules (in my experience) can be very particular about having their shapes altered. I think about the number of times I’ve seen single methyl groups totally alter the character of a drug candidate, and I continue to wonder.

The best solution for most such worries would be a tagless, label-free assay system, but these can be hard to realise. My best hope is that mass spectrometry will eventually rescue us all. The field has made so many advances in sensitivity and selectivity over the years that it’s encroached on many other analytical techniques. The combination of constantly improving equipment and perhaps the cunning use of stable isotope labels, which are, in tagging terms, the closest thing going to a difference that makes no difference, might yet turn out to be the answer. No doubt these systems will have their idiosyncrasies, but we haven’t met those particular devils yet. They can just join the line and wait with everyone else!