Most of us can come up with an image, but most of our images are probably different. That’s the problem with laboratories, or perhaps it’s just the problem with chemists. If you ever get involved in lab design, you’ll find that there are many different ways to accomplish the same things. You’ll also find that the people you’re trying to please have very strong opinions on almost every one of them, but you probably already knew that.

But surely some of these designs are really better than the others? At one extreme, that’s true. It’s easy to imagine a lab so poorly laid out that people are always squeezing past or bumping into each other, where crucial pieces of equipment are wedged into unwieldy corners because there’s nowhere else to put them. (What’s that? You say that you worked there in graduate school?) Everyone knows what a bad lab looks like. But is there an opposite design, one that everyone would agree is the right place to do research? 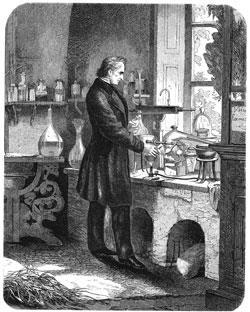 The architects will assure you that this is indeed so, and that they happen to have that design ready for you. It will do wonders. It will make people interact (at long last), catalyse ideas, increase productivity and boost morale, as opposed to that hovel you’re currently enduring.

I’ve never been too sure about these claims. As far as I can tell, a bad workspace can hurt, but a good one can only do so much. Based on my various moves into new buildings, the one amenity that everyone appreciates is space. Scientists like to have room for all their stuff (and most of them like to have a lot of stuff). Roomy hoods, lots and lots of drawers and cabinets, easy access to spacious side rooms full of more equipment - who could argue? Give everyone enough territory, and most other arguments will resolve themselves. Conversely, cram everyone in elbow to elbow, and nothing will overcome it. No one will be impressed with how ’high-end’ the equipment is when someone else’s shoulder is blocking it.

It’s worth thinking about that equipment, since it’s a big part of modern lab designs, and getting bigger all the time. All you have to do is look at some old photographs to realise that the standards have changed a good deal over the years. There aren’t many big boxy instruments around those black-and-white shots, are there? Now any modern chemistry lab has to deal with the problem of where to put all of it. You can tell that the manufacturers know this, since the ones with small-footprint devices never fail to mention that feature in their sales pitch.

You can see that latter difference in the instrumentation even if you just look back 25 years or so: the 1970s and 80s may have been the peak of the ’big and boxy’ era. Size has become a selling point, but appearance has changed as well. There is, of course, a lot more industrial design to be seen everywhere these days, and lab equipment (while not the cutting edge) has felt the effects. A chunky, squared-off yellow-beige box invariably houses an old instrument, one that stands out against the more recent curvy blue and white purchases. No doubt those will look dated at some point, although I’d hate to predict what’s coming next. Perhaps retro styling will make its way into lab equipment, and HPLCs will be offered in authentic disco-era housings.

No matter how spacious and gleaming a new lab space is, though, time and chance happeneth to them all. A laboratory is meant to be used. Solvents will be spilled, corners will be banged into, papers will pile up, and the drawers will fill with what-is-all-this-anyway. Give it some time, and the new lab will begin to look like - well, like the old one.