Some medicinal chemists can't get enough fluorines in their molecules. Derek Lowe explains the love-hate relationship

Some medicinal chemists can’t get enough fluorines in their molecules. Derek Lowe explains the love-hate relationship

Fluorine is a nasty element. That may be an unfair judgment, but I’m prepared to defend it, at least as long as we’re talking about the zero-oxidation-state pure element. I have never used fluorine gas, and I have no plans to do so, since I also have no plans to explore the exciting world of rigorous gas line technique and passivated alloy labware, not to mention the even more exciting world of fluorine’s alarming tendency to ignite things and blow them up. I’ll leave it to those who love it. (Some do. There truly is no accounting for taste.) 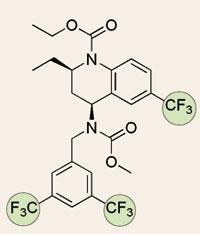 But organofluorines, on the other hand, are dear to a medicinal chemist’s heart. (I’ll come back to the hypocritical nature of that affection!) The carbon-fluorine bond is like nothing else in the world, and sometimes it can make the difference between a structure that fails to get past a rat assay and one that goes out onto the market and gets taken by millions of patients. I really doubt there’s a working drug discovery chemist who hasn’t reached for a fluorinated analogue of a lead structure at some point.

Several factors come together into one odd package to give you this effect. Fluorine’s small, so substituting it for hydrogen doesn’t change the shape of your molecule all that much. And it is, of course, as electron-withdrawing as an element can be, so the charge distribution of your structure can change dramatically. That combination of size and charge characteristics gives organofluorine compounds rather strange properties. In some ways, you’ve made a compound much less polar by fluorinating it, and in some ways more. (This accounts for the whole branch of organic synthesis that exploits the properties of polyfluorinated solvents and reagents.)

At the same time, the carbon-fluorine bond is ridiculously strong, making it one of the few groups that can be counted on to escape demolition in the wrecking yard of metabolising enzymes. So half the time, medicinal chemists are putting fluorines on their molecules while hoping to change everything. And the rest of the time they’re bolting fluorines on like armour onto metabolic hot spots while hoping that this doesn’t change too many other things.

Not all these changes are going to work out. Anything that can produce a dramatic improvement is equally capable of giving you a dramatic problem: a sharp blade doesn’t care what it cuts. The textbook example compares the acetate ion, which is everywhere in biochemistry, with fluoroacetate, which is extremely poisonous. That’s the basis for the med-chem practice of avoiding single fluorines on terminal alkyl groups for fear of producing fluoroacetate when a carbon-carbon bond gets chewed off metabolically. Everything else might go, but that single fluorine will remain.

But decorating your molecule with as many fluorines as it can hold isn’t a good idea either. One thing you can count on with polyfluorinated compounds is that they don’t care for water, which is a problem in drug development. You run the risk of making things that would make better fire retardants or nonstick cookware coatings than drugs. Pfizer’s failed cholesteryl ester transfer protein (CETP) inhibitor compound torcetrapib had three trifluoromethyl groups on it - clearly the choice of some desperate chemists trying to come to terms with an extremely greasy protein binding site. Unfortunately, nine fluorines didn’t help to give the molecule desirable physical properties.

In the end, though, you can’t get away from fluorine’s elemental nature. At some point, someone usually has to work with some kind of brutal reagent to get those fluorines into those molecules. (There’s been a lot of progress, but for many systems, the world is still waiting for tame fluorination conditions.) Medicinal chemists in the discovery labs tend to avoid the problem by purchasing building-block compounds, with the nasty work already done by someone else (someone with better equipment!), but that’s not always possible. If some totally new fluorinated piece has to be made, then the scale-up chemists, for their part, may want to turn around and pay someone else to do it: someone, again, with better equipment, and a lot of experience, and a perverse love for fluorine and what it can do.