There are many reasons for completing a total synthesis: for the medicinal or biological properties of the target; for the prestige of conquering a leviathan; or to showcase synthetic technology. This month’s paper falls squarely into the latter camp, clearly chosen to show off aldol methodology developed by Hisashi Yamamoto from the University of Chicago, US. Happily, EBC-23 is also very much of medicinal interest, proving a potent inhibitor of human prostate cancer, with no apparent side effects (in mice at least).1

With aldol reactions at the core of the synthetic strategy, the structural motif of EBC-23 can already be guessed - it’s a polyketide. Containing five hydroxyl-type stereocentres, the group’s choice of target is tailor made for aldol-type methodology, particularly to that created by Yamamoto and his team (and perhaps its selection resulted from a judicious literature search...). First described in an early 2010 paper,2 Yamamoto has shown that using an exotic - and frankly enormous - protecting group can exert great control and efficiency on this venerable reaction.

An example of such a cascade occurs from the start of the EBC-23 synthesis, using a long alkyl chain aldehyde and two units of a silyl enol ether. The silyl enol ether can easily be seen for the masked aldehyde it is, and under the conditions used, the latent aldehydes are unmasked by the supersilyl group hopping over to protect the newly formed hydroxyl group after each addition.

After those first two additions, a slightly more complex aldol with an acetone equivalent then set the third of five hydroxyl centres (figure 1). A traditional aldol coupling with a small

-hydroxyaldehyde based fragment provided the remaining two, and completed much of the complexity. 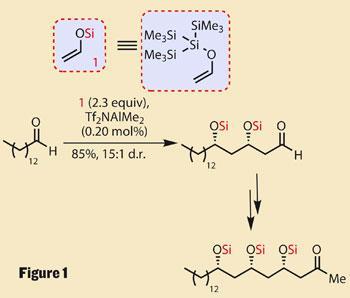 Addition of acryloyl chloride to the only unprotected hydroxyl provided a second alkene group, allowing ring-closing metathesis to close a dihydropyranone ring - using a somewhat unusual catalyst (figure 2). It’s not the chemical structure of the catalyst that’s unusual: ruthenium-based with an N  -heterocyclic carbene and an alkoxybenzylidene ligand - very similar to the Hoveyda-Grubbs catalyst. However, according to the Chinese company Zannan that holds the patent, the sulfonamide on the benzylidene portion makes it even more stable and active. 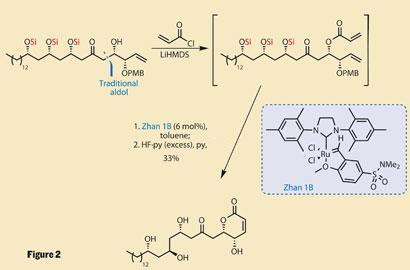 With only one ring complete, and a complex spiro - stereocentre to install, it might look like there’s still a lot of work left in this synthesis, but those familiar with polyketide chemistry know we’re almost there. With all the supersilyl groups removed, the molecule is just desperate to cyclise. And removing the p  -methoxybenzyl (PMB) protecting group with 2,3-dichloro-5,6-dicyanobenzoquinone (DDQ) completes the synthesis, returning EBC-23 in a total of ten steps (figure 3).

Discovered independently by two chemists in the 1870s, it’s remarkable that 140 years later, science is still tweaking and improving the aldol reaction (or should that be the Borodin-Wurtz reaction?).3 Moreover, it’s astonishing how much we still rely on this incredible fragment uniter.