Simultaneous publication of the same target is a phenomenon that isn’t uncommon in total synthesis. Research groups and publishing houses are often well aware of the parallel work, and find that concomitant publication is stimulating. However, in the case of englerin A, this feat is all the more unique, as the synthetic strategies used by Dawei Ma’s group at the Chinese Academy of Sciences, Shanghai, China,1 and Antonio Echavarren’s team at the Institute of Chemical Research of Catalonia, Spain,2 are extremely similar.

So what’s all the fuss about; why is englerin A such a popular target? Well firstly it has an impressive biological profile - exhibiting impressively selective and potent inhibition of renal cancer cell line growth. Secondly, and perhaps more importantly to the chemists in question was its structure - englerin A contains seven adjacent stereocentres, and therefore represents the kind of challenge organic chemists can’t resist. This nut was first cracked by Mathias Christmann at the end of last year,3 in an asymmetric synthesis which established the stereochemistry of the target and confirmed the structure. However, both Echavarren and Ma felt the initial work could be bettered, with both minds focused on the same element.

The key to both syntheses is the use of an exceptionally popular element in modern synthetic methodology - gold. The affinity of gold catalysts for unsaturated bonds allows for impressive skeletal rearrangements, and is often remarkably mild. A second aptitude is the ability for gold catalysts to react with unfunctionalised hydrocarbons; no stannyl or boronic acid groups (mainstays of palladium chemistry) required here. In the case of Ma’s work, building the cyclisation substrate took only five steps, starting with citronellal (a common terpene), and using a boron-mediated aldol to install the remaining stereocentre.

Ma found that the chemistry required a little optimisation of both conditions and catalyst to prevent formation of a cyclopentene byproduct (figure 1). Fortuitously, the simplest (protecting-group free) substrate and unornamented gold(I) chloride catalyst proved to work the best, resulting in a very reasonable yield of product. Containing the key 5,7-ring system required of the product, as well as five of the necessary stereocentres, this product was in excellent shape. However, the next two stereocentres were more difficult to impart, requiring several steps. An epoxidation was able to introduce a hydroxyl group at C-6, but with the wrong stereochemistry. In a rather neat two-step oxidation-reduction sequence, Ma was able to invert this centre, but this also inverted the C-9 hydroxyl (figure 2). This was rectified in a further inversion using a nucleophilic displacement. Further elaboration to complete the synthesis took a further seven steps, as part of a total 15 steps for the synthesis.

Echavarren’s team bent their approach about the same gold methodology, but went about substrate design slightly differently. In their work, an additional hydroxyl group was positioned in the molecule from which they hoped to direct later synthetic operations. Synthesis of this substrate was slightly more complex than that used by Ma, but just like Ma’s strategy the route relied on an aldol coupling to form a key carbon-carbon bond and impart a hydroxyl stereocentre, and also began with a terpene - geraniol in this case (figure 3). They used a more complex catalyst, which could be used in a lower loading than Ma’s, and returned an improved yield. 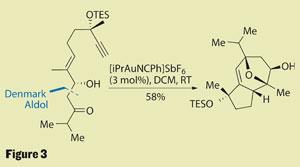 The additional stereocentre came into use almost immediately, as after deprotection it was used to form an epoxide and an adjacent tertiary alcohol. The epoxide was then reduced to give a chiral allylic alcohol (figure 4). This route allowed transfer of the hydroxyl stereochemistry from the original position to that required of the product in a shorter and more efficient sequence.

Again, only a few more steps were required to get to the product - five to be specific - with a final step-count of 18 steps, three more than that of Ma. However, the bigger difference between these two routes is that of philosophy. The former synthesis relied on using simple reagents and accepting slightly poorer yields in the context of a shorter route. In contrast, the latter spends more effort in designing an optimised substrate and whilst the individual steps are higher yielding, the overall route is not.