Chemical reactions can be persuaded into action in all manner of ways as an alternative to just heating them up. Each form of energy can induce reaction in one way or another. Perhaps the most unusual are mechanical means, where the reactants are ground together like herbs in a mortar and pestle. Ultrasound baths are more familiar, and microwave reactors are almost commonplace, although there is still some debate over whether they are simply heating very quickly or doing something more unique.

Less controversial, but still popular, is using light to encourage a reaction. The ease of control is perhaps the key to its popularity, as elementary physics tells us that the amount of energy introduced into the reaction is proportional to the frequency of the light, E  = hv. In other words, controlling the colour of the light allows the chemist (and interior designer) to finely control the reactivity.

Corey Stephenson of Boston University, US, is an expert in this field (and seems to have a very tastefully lit lab...) - in particular, a type of reaction called photochemical reduction-oxidation (photoredox).1 He and his team have charmed photons into performing many chemical tricks, but one they admit was serendipitous is a photoredox dehalogenation using blue light and a ruthenium bipyridyl catalyst. This generates a tertiary benzylic radical, just stable enough to be reactive but not prone to degradation (figure 1).

To showcase this technology, Stephenson quickly leapt upon a group of natural products known as the hexahydropyrroloindoline alkaloids.2,3 Their potent biological properties and dense functionality has made them a popular synthetic proving ground. However, while all that attention is good for validation, the bar has been set rather high!

Stephenson’s team began their synthesis with a commercially available tryptophan building block, bearing a single stereocentre. Selective protection of the amines, followed by bromocyclisation generated the 6,5,5-fused tricyclic product in excellent yield, generating the key precursor for their chemistry after converting the ester to a methyl amide.

The critical coupling step was performed with minimal fuss - other than degassing of solvents (removing any unwanted oxygen, which can quench radical intermediates). An excess of the cheap indole coupling partner was required, but a low loading of the more expensive catalyst was sufficient (figure 2). A strip of blue LEDs 2cm away from the reaction vessel provided a convenient and cool light source. (My own experience with light-induced chemistry used a high power flash tube, which was so intense it heated the reaction to reflux in minutes.) The result of their efforts is a fantastic yield of the desired product, and an admirably high-tech looking fumehood! The colour of the light wasn’t purely aesthetic, though - by narrowing the band of radiation used, the chemistry becomes far more selective and mild, targeting only the desired reaction.

Back to the old school

The remaining chemistry appeared relatively straightforward, but as is all too often the case, this is where the group came a little unstuck. Their initial attempts at forming the triketopiperazine required in the product met with failure, until they considered the product in a different manner - recognising that it is a (rather complex) amino acid. This led them to the resolutely old school chemistry of Robert Burns Woodward, one of total synthesis’s most revered practitioners. 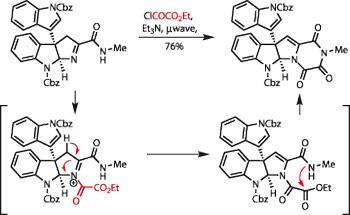 A dose of N-bromosuccinimide added a bromine adjacent to the amide, which was then eliminated with base to form an imine. Next, this was acylated and the acyliminium intermediate deprotonated, forming an enamine (figure 3). The attached ester could then condense with the methyl amide to form the required triketopiperazine. A swift deprotection with a strong Lewis acid (boron trichloride in this case), completed the synthesis in ten steps.