In a conversation at the beginning of this year, a friend and I considered the most challenging targets available to the total-synthesiser - and maoecrystal V was at the top of the list. A quick inspection reveals a trio of contiguous quaternary stereocentres, along with an extremely congested pentacyclic ring system. Little wonder, then, that this target has been so popular. Add to that an impressive biological profile (potent and selective inhibitory activity against HeLa cancer cells (IC50 = 60nM)) and it’s no surprise that over ten ’studies towards’ papers have been published since its isolation in 2004,1 including work by some of the most prolific scientists in the field.2,3

News that the beast has fallen will be received with dismay in those labs - doubly so since this route is so concise. Sixteen steps were all that were required for Zhen Yang’s team at Peking University in China4 - leaving little to be desired from subsequent routes.

Starting with a rather unconventional coupling, the group quickly built the first quaternary stereocentre. This oxidative coupling reaction is unfortunately not discussed in any detail, and neither is the synthesis of the aryllead intermediate, so we’ll have to wait for a full paper to understand their rationale for using such exotic - and presumably toxic - conditions (figure 1).

However, the team do go into some detail regarding an awkward reduction of the ketone moiety. They attempted it with simple reagents, hoping that substrate control would lead to delivery of hydride from the desired face. However, attempts with organoboranes, hydrosilanes or even sodium borohydride all failed - predominantly forming the wrong diastereomer. This problem was solved by moving to a subtly different reagent - tetrabutylammonium borohydride. The group rationalise their success by invoking a cation-p interaction between the phenyl ring and the ammonium salt to deliver the hydride to the correct face.

Reducing the remaining ester allowed the group to attach a diethoxyphosphoryl side chain, which included a diazo group. This sensitive functionality was gently prodded with rhodium - prompting formation of a carbene, which inserted into the phenolic hydroxyl group, forming the seven-membered ring with ease. The conspicuous phosphonate was then reacted with paraformaldehyde to form a strategically important exocyclic methylene group (figure 2).

Lead in the lead

Using a method the group has had pinned to this synthesis for some time,5 they were able to create two new rings, completing much of the intricacy for which maoecrystal V is famed. The reaction in question is a Wessely oxidative acetoxylation - which does what it says on the tin. Using lead yet again, the reaction oxidises the phenol by adding an acetate group, and oxidising the hydroxyl to a ketone (figure 3). This breaks the aromaticity of the aryl ring, generating a diene - perfectly set for a Diels-Alder cycloaddition with the exocyclic methylene, and similar to the strategy used by Samuel Danishefsky of Columbia University in New York, US.2 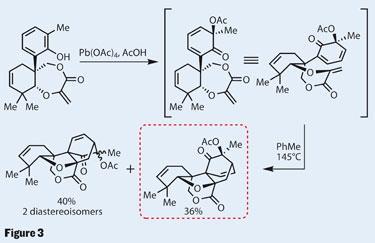 Using such an intramolecular Diels-Alder builds complexity quickly, and as the two components are already joined, the degree of stereoselectivity is often high. Unfortunately, it was not enough in this case, resulting in three isomers spread over a respectable 76 per cent yield. The team’s desired product, though, was the most favoured - which I’m sure came as a welcome relief.

At this point, the team was painfully close to the target, but needed a further six steps to get there. Interestingly, both the oxidation of the remaining alkene to a dione and cleavage of the extraneous acetoxy group were done using radical reactions - showing considerable prowess for functional group selectivity.

Yang’s triumph is embittered slightly by the brevity of this paper - I look forward to reading the whole story in a full paper to understand the remarkable chemistry the group has used.