Although anti-cancer and antibiotic natural products get deserved attention from synthetic chemists, it’s good to be reminded that the biosphere does not revolve entirely around coughs, sneezes and suspicious itches, and that plenty of other biological processes can have a big impact on our daily lives. Recent food shortages have raised questions about efficient staple food crop production, particularly in light of the increasing acreages set aside for biofuel crops. This farming squeeze has renewed interest in compounds with anti-insect abilities, especially those known for their activity against specific pests.

One recent example is penifulvin A, a sesquiterpenoid isolated from Penicillium griseofulvum, which has proved potent against the fall armyworm.1 I’ll take a leap of faith at this point and assume that I’m not the only one not particularly well schooled in the eating habits of this hungry beast - forgivable for non-American scientists, as it is native to the Western hemisphere - but its larvae like nothing more than to chow down on barley, cotton, corn, oats, rice, tobacco, and wheat, among others. You can see the conflict of interest here, and why Johann Mulzer of the University of Vienna in Austria saw penifulvin A as a viable target.2 Of course, the tightly packed functionalisation and complex arrangement of rings and stereochemistry might have had an influence too.

On to the specifics, and penifulvin A contains five stereocentres clustered about a central quaternary carbon which is part of all four rings - which is hard enough to describe, never mind draw. To build such a congested system, Mulzer needed reactions renowned for their prowess in a tight spot. The team focused on chemistry developed by Stanford University’s Paul Wender, which allows cyclisation of arene olefins into ring systems almost as impossible-looking as artist M C Escher’s.3 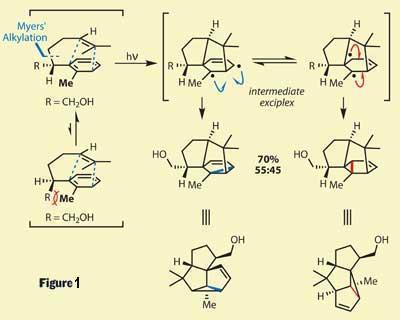 Mulzer’s synthesis starts with the creation of the precursor to this cyclisation, which was produced from commercially available starting materials in four steps using the popular Myers’ chiral auxiliary to install asymmetry. Shining a bit of light on this structure induced the key [3+2] cyclisation, giving an exciplex-type intermediate (figure 1). The stereochemical pathway of this reaction is controlled by the existing stereocentre, and its interaction with the methyl group on the aryl ring to avoid strain - most correctly described as minimising the A1,3-strain. The exciplex can then react in two ways, producing a pair of isomers in a 55:45 ratio, with the desired product dominating.

The resulting ring system actually includes one ring too many. In a feat of surprising selectivity, the team selectively reduced out this extraneous ring to produce the 5,5,5-fused framework required (figure 2). This meant that after only six steps, the team had completed three of the required rings, and four out of five stereocentres - amazing work.

However, with the end in sight, this is the point in many a synthesis where the proverbial wheels can come off, with the final functionalisations taking almost as many steps again to complete. But Mulzer manages to complete this target with remarkable efficiency, by destroying one of his freshly installed rings (figure 3).

Treating the cyclopentene with ozone cleaves open the cyclic alkene to give a pair of aldehydes. The team followed this with an impressive cascade cyclisation, induced by attack of the free carboxylic acid onto the proximal aldehyde, with the final ring formed when the intermediate anion snaps shut onto the remaining aldehyde. The lactol-lactone then only required oxidation to complete the synthesis, in a total of just eight steps. 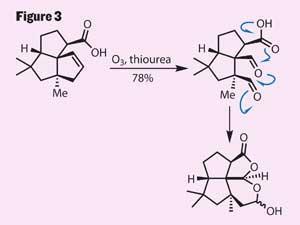 Mulzer suggests that his route could be used to make the other members of the penifulvin family, along with purely synthetic analogues. These molecules could then be used to probe the insecticidal activity of the family, and perhaps develop a useful pesticide.