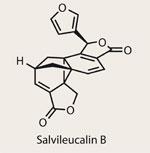 Although most of the natural products I’ve discussed have had biological activity at the core of the rationale for their synthesis, most organic chemists will admit that an unusual chemical structure is by far the stronger draw. Sometimes the medicinal properties are mentioned so briefly as to appear as an afterthought (for the grants review committee...), whilst a rarefied few, such as salvileucalin B, are built for the building.

At the heart of the synthetic appeal is the norcaradiene core - a six-membered diene ring fused to a fully substituted cyclopropane (all three carbons are quaternary) - quite a puzzle for even the most accomplished chemists. Such structures often rearrange to seven-membered cycloheptatriene rings, but this one is stabilised by the polycyclic framework around it. The challenge was taken up by Sarah Reisman1 and her small team at the California Institute of Technology in Pasadena, US - who were clearly working quite quickly, as the target was only isolated in 2008!2 Helping matters along was their experience in the field of cyclopropanation, especially when applied to arene rings.

The synthesis starts building functionality quickly, using a variety of interesting approaches. The first to interest me was a rather neat asymmetric alkylation of furaldehyde to put in the first stereocentre. Four steps further on, the group appended two further acetylene moieties to this product, building in a further stereocentre using pseudoephedrine as a chiral auxiliary to control a second alkylation.

This preponderance of triple bonds is not accidental though - rather than starting with an arene and adding side groups by aromatic substitution, the group instead built the aromatic ring after the functionality was in place. Stripping away the trimethylsilyl (TMS) protecting group left all three alkynes free to react with a ruthenium catalyst in a formal [2+2+2] cycloaddition, closing three new rings and completing the flatter part of the target ring-system. Lastly, the auxiliary was removed to free a carboxylic acid - a key functional handle as their synthesis progressed (figure 1).

After inserting an extra carbon to bump this acid group further away from the newly formed cyclopentane, the group then converted it to a b -ketonitrile and added a diazo group. Those familiar with cyclopropane chemistry will be entirely unsurprised by this move, and even less so by the next step - a rather neat cyclopropanation reaction. Using a fairly simple copper catalyst, the diazo group is removed, leaving behind a metal carbenoid. This adds into the nearest bond of the arene ring, forming two new carbon-carbon bonds, and completing the cyclopropane (figure 2). The reaction efficiency is impressive, especially as such a reactive intermediate could react in many modes.

With the most complex part of this target complete, you’d be forgiven for surprise when examining their next move - pulling the cyclopropane apart. This reaction is actually somewhat incidental to their synthesis, but when attempting to reduce the nitrile group the team found a rather complex ether, rather than the alcohol they expected. This resulted from a rearrangement of the aldehyde intermediate in the reduction (figure 3). A little more of the diisobutylaluminium hydride reductant was enough to reverse this rearrangement, returning the desired product - and presumably the team’s confidence after this unforeseen detour! 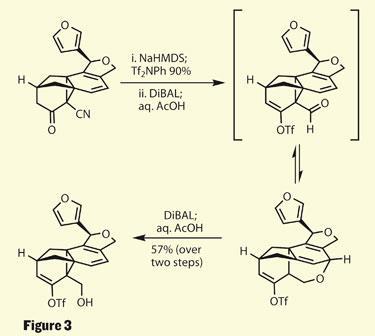 One more step was required to build the remaining  g -lactone group, using a neat piece of palladium chemistry to insert a carbonyl group and close the ring. This left one last transformation to complete - oxidising the tetrahydrofuran to a second lactone. Leaving such a reaction to the last step of the synthesis is a little risky, but using chromium trioxide and 3,5-dimethylpyrazole3 - a combination of reagents that are new to me - the target was completed in a more than acceptable yield.