As we tackle the global downturn and seek to position the UK so that it’s best placed to prosper when the upturn arrives, science is central to the government’s plans.

Gordon Brown has stated that ’we will not allow science to become a victim of the recession, but rather focus on developing it as a key element of our path to recovery’.

The science budget is safe. But as the government continues to build on its record investment in the research base, we must use that public money for maximum national advantage.

I have recently proposed three criteria that the science community, business leaders and government could apply in deciding where investment might be refocused.

We should concentrate on where the growth opportunities over the next two decades are significant; where the UK has a realistic prospect of being ranked in the top two worldwide; and where we have a clear competitive advantage.

This proposal has caused concern in some quarters - including this magazine. Given that reaction, let me reiterate several conditions that I’ve insisted upon in making the case for greater focus. 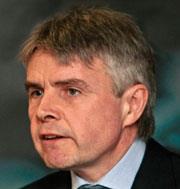 There will be no retreat from pure research, which is the source of so many breakthroughs and underpins our international reputation for science. Our expectation of academic excellence is also non-negotiable, as is our support for a diverse science base, because we must retain an interdisciplinary capability and the flexibility to address new challenges as they arise.

Equally, the government remains wedded to the Haldane principle guaranteeing the independence of scientists in allocating resources. [Named after Richard Haldane, the Haldane principle states that decisions about research fund spending should be made by researchers rather than politicians.]

Research councils, national academies and university vice-chancellors are now taking on the urgent task of identifying those fields and sectors in which the UK has the greatest potential to establish a global lead in research and innovation.

I have refrained from advocating what areas should be priorities for investment, because this exercise must begin with science and business, not with government.

Instead, I have highlighted a few sectors with obvious potential: medical research in particular. The demand for improved healthcare is both global and infinite. The UK has already achieved international prominence in life sciences. And in the National Health Service, we possess a resource that no other country can rival for driving developments in patient care, drug discovery, medical devices, and services.

As a discipline, chemistry is clearly fundamental to life sciences and many other sectors besides. Almost every form of manufacturing, for example, relies on the application of chemistry to deliver innovations that underpin growth and create new markets. With annual sales in excess of ?500 billion, industries underpinned by chemistry are critical to the UK economy.

As important, answers to the most pressing global challenges rest, in part, with chemistry: climate change, renewable energy, and food security.

The UK is indeed a pioneer in modern chemistry, thanks to the likes of Dorothy Hodgkin and Harry Kroto. Over the past 10 years alone, it was here that carbon nanotubes were discovered and progress made in understanding the mechanisms of biosynthetic pathways. And with the recent opening of the Knowledge Centre for Materials Chemistry at Daresbury, we are laying the groundwork for a bright future.

But recent achievements of this kind offer no cast-iron guarantee of long-term success, which is why the current debate on prioritisation is so important.

The last International Assessment of University Research in Chemistry in the UK, conducted in 2002, found that, while our academic chemistry was ’superb in its scholarship’, we were ’substantially weaker’ in our ’capability for innovation and discovery’.

I hope that the current international review will demonstrate that we’ve made substantial progress on this front in the past seven years. For, in the current climate - not just the downturn, but the reality of intense global competition - UK research chemists must join forces with business and government to exploit our abundant talent and potential.