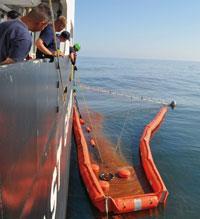 This editorial is about disasters. These last few months have seen a fair deal of natural disasters; to be precise, three earthquakes (Chile, China and Haiti) and a volcanic eruption that is still spewing ash into the atmosphere causing disruption to air travel in Europe. To this, we now have to add a man made disaster: the explosion aboard an oil drilling rig in the Gulf of Mexico, US, that killed 11 workers and injured 17 others. The resulting oil spill currently affects 6500 km2  of ocean and threatens a number of delicate ecosystems.

A series of measures to stop the spill have been implemented with a varying degrees of success - vessels trying to halt the progress of the slick using booms, oil and water separators and oil skimming devices, controlled burning of the oil, the installation of first a container dome and then a pipe (a ’riser insertion tube tool’ for those in the know), the use of dispersants etc. However, more than a month after the explosion occurred we still don’t know how many gallons of oil are flowing into the sea and at the time Chemistry World  went to press, many were complaining about how the US government is handling the disaster. This type of discontent is not surprising, as in any crisis of this type - at least any that I have witnessed - accusations of mismanagement of the disaster by governments, companies involved and environmental agencies are rife, and recriminations, calls for resignations and attempts to pin the blame on somebody else have always been the order of the day.

In this case, BP (the oil company who own the oil well) has quickly taken charge of the clean up activities and all the costs incurred, which to date amount to $625 million (?435 million), until the necessary investigations are carried out. This amount also includes the payment of compensation (19 000 claims have been filed and 8000 payments have been made) and grants totalling $70 million to Florida, Alabama, Louisiana and Mississippi
to help mitigate the economic impact of the oil spill.

The point is that while there is nothing we can do about natural catastrophes, there is a lot we can do about man made disasters. BP was still in the process of rebuilding its reputation five years after an explosion at its Texas City refinery, US, led to 15 deaths and 180 injuries. A damning report published by the US Department of Labor’s Occupational Safety and Health Administration (OSHA) following investigation stated that the company ’wilfully’ failed to implement safety measures at the site. I’m not trying to imply that BP has got a better or worse record than anybody else and, yes, accidents do happen, but it appears that we are allowing major incidents to happen this often by not enforcing stringent enough safety legislation and controls.

But what worries me is whether we are learning lessons from this? As the world shifts away from using fossil fuels towards low carbon means of generating the energy we require, the use of nuclear power is expected to increase. It’s now 25 years since the Chernobyl incident and nuclear will form a critical component of our energy solution. However, are our regulators able to maintain their good track record with nuclear, if they cannot do the same with oil?