Paul Docherty gets to grips with some thiodiketopiperazines 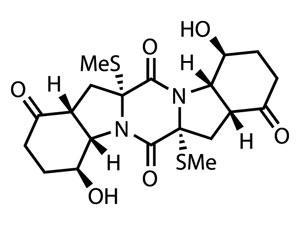 It’s unfortunately true that my knowledge of chemistry is not increasing over time, but actually decreasing. This is the case for most scientists – their knowledge is at its broadest towards the end of their undergraduate degree, and then narrows as they either pursue a graduate programme or commercial research. Specialisms in particular fields are all but inevitable, and anything outside that tends to depart the mind, barring significant effort to retain it. In my case, statistical thermodynamics is but a vague recollection (some might say trauma), and my inorganic chemistry is receding fast (like my hairline). However, when the inorganic is sufficiently adulterated with the organic, I’m still relatively capable, and those neurons were recently stimulated by some intriguing sulfur chemistry critical to a total synthesis.

The class of natural products known as 2,5-diketopiperazines is both broad and synthetically well-trodden. An important sub-class of these targets are found with a sprinkling of sulfur atoms, and seem particularly well-suited to pathogen-bashing – and in particular the nefarious malaria protist and poliovirus. Needless to say, their intriguing chemistry and biology has busied many a chemist, with much ongoing research (including the pioneering work of Mohammad Movassaghi). However, a simple, safe and robust method for sulfenylating 2,5-diketopiperazines has not yet been identified, preventing commercialisation of this chemistry – something that a team from the Scripps Research Institute in La Jolla, US, led by K C Nicolaou, hopes to resolve.1

In its most simple form, sulfur exists as eight-membered rings of sulfur atoms. However, elemental sulfur is quite reactive, and when treated with a base, this ring can easily be fragmented. The team in California did just this, reacting S8 with sodium hexamethyldisilazide (NaHMDS) to isolate a tetrasulfide species that could then be used as a sulfenylating reagent.

The reaction proceeds by forming an S4 bridge across the diketopiperazine, which can easily be fragmented to provide the pair of sulfide groups required (figure?1). The team demonstrated the efficacy of this reaction in various highly functionalised substrates, but there really is no alternative to featuring this in the synthesis of a thiodiketopiperazine natural product. However, and perhaps unsurprisingly given the renown of the Scripps team in this field, they actually showcase the synthesis of seven members of that family – but I’ll keep this brief, and stick to one – epicoccin G.

The team started with something I’ve glossed over so far – the synthesis of the diketopiperazine itself. This dimeric molecule was produced by divergent synthesis from a common starting point, taking four steps from known materials to get to the point of divergence. One half of the material had the tert-butoxycarbonyl (Boc) protecting group removed to leave a free amine, while the other half had the methyl ester cleaved to the corresponding acid. A simple amidation reaction using a coupling agent (BOP-chloride) gave them half of their diketopiperazine ring; treating this with trifluoroacetic acid followed by base finished the job (figure 2).

A few steps further on (after removing the extraneous hydroxyl groups), the team was set to showcase the sulfenylation chemistry. They easily formed the disulfide bridge, cleaving again with sodium borohydride, but this time quenched the dianion with methyl iodide to form the desired bis-(methylthio)diketopiperazine.

With the centrepiece of the synthesis complete, the team had one last trick to perform – oxygenating the diene functionality present in both peripheral rings. Working very directly, the team used the singlet oxygen to form a bridge across the diene, forming a reactive intermediate that could be quenched with DBU (a hindered organic base). Singlet oxygen reacts spontaneously with many functional groups, and is produced from its more common (and well-behaved) triplet form by a combination of ultraviolet light and a tetraphenylporphyrin (TPP) sensitiser (figure 3).2 Following the quench, the team needed only to reduce the remaining C=C double bonds to return the target in remarkably few steps.