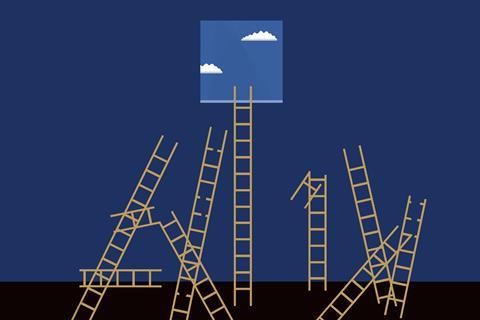 By the time I was into my fourth year of graduate school in the late 1980s, I was definitely looking for the exit. And since my project was the total synthesis of a large antibiotic molecule, the most likely escape route was (naturally enough!) to finish making the thing. But while this thought had occurred to me on an almost hourly basis, it was a difficult strategy to execute.

A major hurdle was that the synthesis had now stretched past 25 linear steps. Anyone who has done this sort of chemistry will appreciate the difficulty: you lose material with every step, because no reaction yield is perfect. If your recovery is 90% each time, by the time you go through 25 steps you will have only 7% of your material – and at 80% each time, you will have well under 1%. I resorted to the usual way around this problem, and started a fresh load of material back at the beginning of the sequence. I loaded the largest vessel I could locate (a bucket) with more starting material than I had ever dared to process at one time.

This worked out for the first eight or 10 steps, to my relief. Not every synthetic reaction scales up gracefully, but I made it that far with more intermediate at that stage than I had ever seen. The next step had always been one of the lower-yielding reactions in the whole sequence, though. One that produced a lot of dark reddish-brown impurities as well. I was not looking forward to that reaction (and the purification afterwards) but it had to be done, and one afternoon I braced myself and set everything up.

I was back in the lab at about 10pm to check on things (this was graduate school, after all), and the reaction seemed to have finished. The workup of the dark crude mixture involved diluting it with solvent and extracting this in the largest separatory funnel in the research group, then evaporating the organic layers and running them down a big white column of silica gel. I set to work, because I had never left the crude mixture standing around, and this was no time to find out what might happen if I did.

The evening went on as I extracted the dark stuff with saturated ammonium chloride, discarded that and evaporated the organic layers to a thick sludge, which I loaded onto the big column. That turned very dark indeed – even worse-looking than I had expected. I kept pouring solvent through and taking off flask after flask of colourless, then yellow, orange, red, then frankly dark brown liquid – all the while getting more worried. In the past, my product had come out just before the yellow stuff, but as I checked one flask after another, I wasn’t finding any. This was bad; very bad. It was now past midnight, and I was standing there looking at rows of multicoloured Erlenmeyer flasks with an increasingly desperate expression on my face.

I thought back to when I’d run this reaction before. I went back to look at my notebook. That’s when I realised that I had never washed the crude reaction with ammonium chloride solution before. Instead of that acidic workup, I’d used mildly basic sodium bicarbonate solution. Why hadn’t I remembered that, or bothered to check? It was becoming more and more obvious that I had destroyed the largest batch of intermediate I’d ever made, the batch that was going to get me out of graduate school. All through my own inattention! I stood alone in the lab with this realisation. There was only one thing to do.

I went home to bed. Then I woke up the next morning and went straight back to the lab, where (wasting no time) I set up an even larger run of that first step again. Back to the bucket; there was no other way. The only way out of this was straight through. That’s when I realised that I really was going to finish my degree and get out of graduate school, because the worst thing had happened and it hadn’t broken me. I would not stop until I was walking out of the door for good.