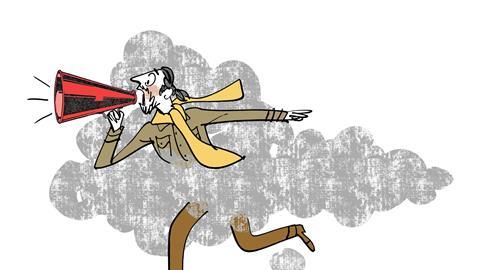 Fire in the lab!

The burning question was: what caused it?

I was walking back to my dorm one evening after a sumptuous dessert (a blueberry cheesecake from a nearby bakery) when something in my peripheral vision drew my attention. It was my lab: smoke was seeping out from every single one of the windows and doors. As I got closer I saw dense fumes emerging and found the lab was locked. Perplexed, I called the authorities.

Luckily enough, the principal of my college was nearby and received the alert. He quickly reached the site, where he found me biting my nails nervously. He asked me and the other staff helping to get buckets of water to douse the fire. Ah, little did my unsuspecting botanist principal know! Promptly, I advised him against doing this – my knowledge of chemistry told me that if the fire had been caused by flammable liquids, electrical equipment or burning metal, water would cause more problems than it would solve. At my behest, he called the fire brigade and we waited there, handkerchiefs covering our noses. Never was I more proud of my chemistry degree than I was at that moment.

A few minutes later, our head of department arrived and congratulated me on my quick thinking. Soon after, the fire brigade arrived on the scene. After donning their safety gear and carefully breaking into the lab with their respirators on, they managed to locate the source. In what seemed like no time at all, they had successfully doused the fire. Alas, the damage was done. An entire section of the laboratory was reduced to ashes, while other parts were damaged, albeit not as much. Unfortunately, we kept reagent bottles on wooden racks – and wood of course is flammable. Broken bottles and glassware lay strewn around the lab among destroyed cabinets.

But what caused the fire? That wouldn’t be answered until two days later, when a team of professors (chemists themselves, of course) put on their sleuth hats and went investigating. The solution to the mystery was an interesting one.

You see, first-year chemistry majors don’t really think twice before using filter paper in the lab. ‘If one is required, three must be better, right?’ was how we thought when I was in my first year. So, the dustbin in the lab was filled to the brim with moist, discarded filter paper. What first-year students also do is take a laboratory course where they are taught how to analyse the elements present in organic compounds. In one important part of that course they learn to use Lassaigne’s test to determine the presence of nitrogen, sulfur and halogens in an organic compound. This particular test requires a filtrate that is made by melting sodium metal inside a fusion tube. And sodium doesn’t go very well with water.

You might have a hunch as to where this is going: someone threw their used fusion tubes with the sodium metal into the very same dustbin where everyone had discarded their moist filter papers. The lab closed at 5.30pm. The sodium sat there, steadily (and exothermically) reacting with the moisture present in the dustbin, seeding a huge fire that devoured one-quarter of a fully functional lab by 8:00pm.

This incident cost the university a small fortune to mend. It also led to stricter safety rules being introduced into every lab in the university. Now, there are separate bins for disposing of different kinds of waste, students are fined for not adhering to good lab practice and all in all, everyone’s vigilance has gone up several notches. Everyone is in general more aware of their surroundings and treats chemistry with the safety and respect it deserves. Thankfully, no serious incidents have happened since.

On a personal level, I received appreciation for my actions in front of the entire classroom, a couple days after the mystery was solved. The professor called me up on the dais and narrated the entire incident, culminating in praise for my quick thinking which helped to avert a far worse situation. Now, that was a silver lining!

While the appreciation did feel great, I hope the next time it arrives, it isn’t because of a fire. I am certainly not going out looking for them! Maybe, I was at the right place at just the right time. Or maybe in this case… the wrong place at the right time? I’ll leave it for you to decide.