15 years ago in Chemistry in Britain 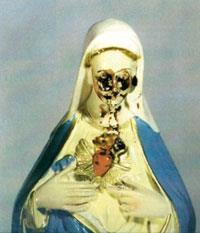 Miracle or hoax? A madonna from Assemini in Sardinia sheds tears of blood

In the first few months of this year, Italy has been inundated with peculiar ’miracles’: a number of statues and icons of the Blessed Virgin Mary have reportedly wept tears of blood.

People often ask chemists how they would make a statue weep, sometimes suggesting the possible use of deliquescent, hygroscopic or other chemical compounds, so I wondered how I could produce a statue from which tears seemingly materialised out of the blue.

What is needed is a hollow statue made of a porous material, such as plaster or ceramic. The icon must be glazed or painted with some sort of impermeable coating. If the statue is then filled up with a liquid, the porous material will absorb it, but the glazing will stop it from flowing out.

If the glazing, however, is imperceptibly scratched away on or around the eyes, tear-like drops will leak out, as if materialising from thin air. When I put it to the test, this trick proved to be very satisfactory, baffling all onlookers.

Among ’weeping madonna’ miracles, the only one officially accepted by the Catholic Church happened in Siracusa, Sicily, back in 1953. This is the best documented case so far, with many eye-witnesses to the ’weeping’.

Letter from L Garlaschelli, department of organic chemistry, University of Pavia, Italy, in Chemistry in Britain(July 1995).