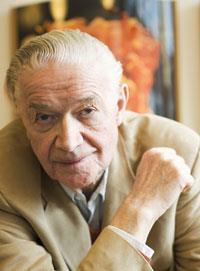 Lennart Nilsson of the Karolinska Institute in Stockholm, Sweden, has been in scanning electron microscopy (SEM) for 19 years. His pictures are renowned in the scientific world for their technique but are also hauntingly beautiful, opening up the world of cells and microorganisms.

The first SEM pictures were made in Cambridge in 1965, as were the first attempts to photograph ’three dimensional’ objects such as plant cells - this was done using an organic coating.

Things have come a long way since then. New coatings producing better picture resolution have been found. Gold was a favourite coating material, but now Nilsson uses a coat of platinum with particles 10 to 20

Ed. A child is born, one of Nilsson’s most famous books showing the first pictures of prenatal life, first published in 1965, has been republished in 2009 with a revised text and enhanced pictures in by Jonathan Cape (ISBN 9780224089951).

For more information on Nilsson and his work see his website.

The launch of the first commercial SEM in 1965 was the culmination of work carried out in Cambridge over many years by Sir Charles Oatley, together with his research student Dennis McMullan. This story is told in Advances in imaging and electron physics: Sir Charles Oatley and the scanning electron microscope  by Peter Hawkes (Elsevier, 2004, ISBN 0080490107) and on the Bernie Breton website.