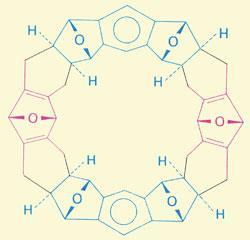 On Christmas Eve 1986, Franz Kohnke, [working under Fraser Stoddart at Sheffield University, UK] isolated the macropolycycle (right) in 3.5 per cent yield. After a decade-long battle we had got the first inkling that 6-membered carbocyclic rings could be evolved by tandem Diels-Alder reactions into belt-like molecules. What a Christmas present!

I have suggested, in the face of considerable opposition from Kohnke, that the macropolycycle should be called kohnkene after its maker.