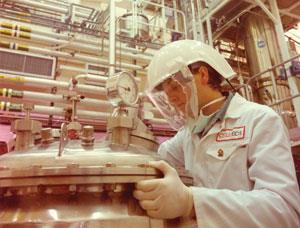 Celltech’s new blue building in Slough symbolises the company’s coming of age, according to its chief executive, Gerard Fairtlough. The company, formed in 1980, needs the new laboratory and administration facilities for its expected future growth. It is situated close to a 2000-litre air lift fermenter, costing ?1 million, which was recently commissioned by Celltech. Fairtlough said that Celltech was Europe’s leading biotechnology company with a world lead in two critical technologies - growing proteins in mammalian cells and engineering antibody genes. Celltech looks set for a bright future with plans for a 5000-litre or even a 10,000-litre fermenter in the 1990s. A BBC television programme made during the first few months of Celltech’s life ended with the question: ’If you were a bright young biotechnologist would you choose to work in Geneva, San Francisco or Slough?’ Fairtlough believes he knows the answer, since many of the brightest seem to have plumped for Slough.
Chemistry in Britain(June 1988)

Flashback ed: In May 2004, the Belgian pharmaceutical and chemicals company UCB acquired Celltech for ?1.53 billion, principally to develop its antiarthritic drug CDP870 (certolizumab), then in Phase III trials. This drug is now marketed under the name Cimzia and last month received approval in the US for the treatment of Crohn’s disease. UCB Celltech (a subsidiary of UCB Pharma), as the company is now known, has further developed the Slough site, with new buildings opened in 2007; the company also has research facilities at Great Abington, near Cambridge, UK.