A village school record book of 1917 states: ’Received circular 1009 asking that horse chestnuts collected by the school children be sent to the Director of Propellant Supplies (DPS), Ministry of Munitions.’

Could any reader explain what possible use the DPS would have for horse chestnuts in 1917? 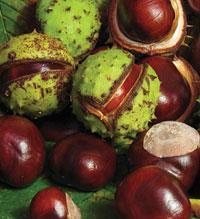 Horse chestnuts were once used for more than playing conkers

Ed: A response came in April 1987 from Reuben Girling of the University of York, UK:

Horse chestnuts were needed at that time as a raw material for the Weizmann process for the production of acetone, in turn needed for the manufacture of explosives.

This process, carried out especially in a plant built at King’s Lynn in Norfolk, UK, used the bacterium Clostridium acetobutylicum strain BY to convert starch into ethanol, acetone and butanol. To save on the use of precious grain as the carbohydrate starting material, children throughout Britain were asked to collect horse chestnuts as an alternative substrate for the fermentation.’

Vast quantities of horse chestnuts were collected, but only 3,000 tons reached the King’s Lynn plant. Collection was restricted by transport difficulties and letters in The Times tell of piles of rotting horse chestnuts at railway stations. The plant began production of acetone from horse chestnuts in April 1918, hampered by the fact that chestnuts were a poor quality starting material. Work continued until July 1918 when the plant was closed.