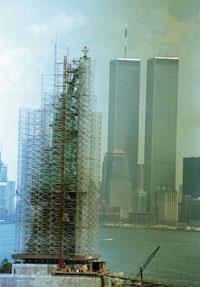 Statue of Liberty being restored in the 1980s using modern materials

The Statue of Liberty is being given a facelift after a century spent standing on her plinth in Upper New York Bay. Interior structures of the monument are being protected against corrosion with a primer coating known as K-Zinc 531 developed in the early 1970s by Nasa’s Goddard Space Flight Center to protect structures at the Kennedy Space Centre in Florida against Atlantic salt spray and fog.

K-Zinc 531 is a water-based potassium silicate product which bonds to steel in 30 minutes to create a hard ceramic finish.

The statue has also had a rib transplant. Severely corroded wrought iron ribs supporting the copper sheathing of the monument have been replaced by stainless steels chosen for their mechanical properties and resistance to chloride corrosion. Some 21 tonnes of Type 316L (2.5 per cent Mo) stainless steel is being used to replace about 1200 curved sections of the wrought iron armature of the structure.

A newer material, ferralium (2.45 per cent Cr, 3 per cent Mo, 6 per cent Ni, 1.8 per cent Cu and 0.17 per cent N), which is lighter and stronger, is being used for the flat bars of the armature. This material has high elasticity and strength but is more difficult to bend into the curved sections.

Ed. The Statue of Liberty was rededicated on 4 July 1986, and reopened to the public the following day. During the renovation the original torch was replaced by a replica, and new stairs and lifts installed.

For more information on the renovation of the Statue of Liberty, see Popular Science  , June 1986, p68.