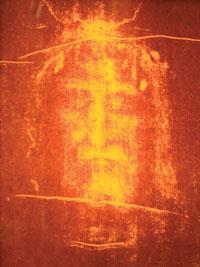 Is this the face of Jesus?

The Shroud of Turin is a piece of linen cloth purported to have wrapped the body of Christ. The results of research into the shroud over the past century have been gathered in a new film The silent witness,  directed by David Rolfe. Pollen analysis has proved that the shroud has been in Palestine and the weave is typical of Palestine at the time of Christ.

A 3D relief of the face has been reconstructed using sophisticated computer photoanalysis techniques. The image appears on only one side of the cloth and how it was created is one of the most baffling of the shroud’s many mysteries. US scientists conclude that it must have been caused by a microsecond burst of intense radiation. It is hoped that permission for a full scientific examination of the shroud will be granted to establish both its age and the elements present.

Flashback Ed: In 1988, three reputable laboratories in Oxford, UK, Zurich, Switzerland, and Tucson, US, carried out radiocarbon tests on the cloth and declared it a brilliant, medieval fake produced between 1260 and 1390.

However many sindonologists (the special word used for Shroud scholars) have called for a re-examination of the radiocarbon dating information, including John Jackson, a US physicist who conducted the first major investigation of the shroud in 1978. Jackson claims that the shroud samples examined may have been contaminated.

In a new television documentary, shown on the BBC over Easter this year, Christopher Ramsey, director of England’s Oxford Radiocarbon Accelerator Unit, which carried out radiocarbon dating tests on the cloth in 1988, has also called for a reinvestigation of the linen’s authenticity.