I started as a laboratory assistant as a local shipyard making tea at 8s 5d a week. 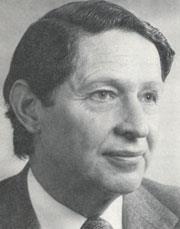 I never doubted what I wanted to do - as soon as I hit organic chemistry, I realised that was for me and I never wavered. Eventually I gained a Royal Scholarship and entered Imperial College in 1936. First degrees were taken in two years and so were PhDs, so that, after four years, I left Imperial as Dr Johnson to start work at ICI at Blackley. I worked on acetylenic compounds, since it was reported that the Germans were using acetylene as a starting material for synthetic rubber via butadiene.

Later I went to work with Lord Todd at Cambridge on natural products (vitamin B12, tropolones and aphid pigments to name a few). Then followed a spell at the University of Nottingham, in a young and expanding research school - lots of keen students and no serious money troubles. I worked on porphyrins and continued my work on vitamin B12. Then in 1968 I became professor of organic chemistry here at the University of Sussex and director of the ARC Unit of insect chemistry and physiology.

Interview with Alan Woodworth Johnson (1917-1982) on his taking up the position of Chemical Society President in 1977. Professor Johnson was instrumental in the unification of the Chemical Society with the Royal Institute of Chemistry (to form the Royal Society of Chemistry).
He was in favour of closer links with other European chemical societies, but considered the proposal for a World Chemical Society (being suggested at the time) to be highly impractical (August 1977)