35 years ago in Chemistry in Britain 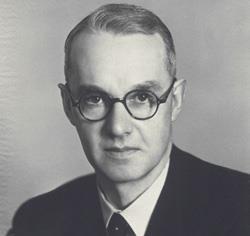 The eminent organic chemist Sir Edmund Hirst died recently. In the summer of 1917 Hirst became part of a team making chemicals for the war effort, directed by James Irvine and Norman Haworth. This began a long collaboration on the chemistry of carbohydrates with Haworth at the universities of St Andrews, Newcastle and Birmingham. Their work focused especially on the ring structures of mono-, di- and trisaccharides.

In 1933, again in conjunction with Haworth, Hirst played the leading role in the structural determination and synthesis of vitamin C - the first synthesis of a vitamin.

Hirst later held organic chemistry professorships at the universities of Bristol, Manchester and Edinburgh, receiving many honorary degrees and awards, including a knighthood in 1964.

Hirst served as President of the Chemical Society from 1956-58.

Ed. Hirst’s long term collaborator Haworth was awarded a share in the 1937 Nobel prize in chemistry. However Hirst was such a ’nice man’ and worked closely with Haworth at several universities over many years that I would doubt if he held any grudges. At least they both got knighthoods.

I personally met Sir Edmund in 1966 when he presented me with a chemistry medal at Edinburgh University. I remember him as a quiet, generous man, who told me that he had started at university studying classics and later switched to chemistry!