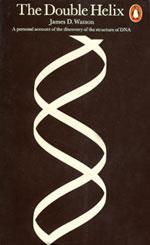 Included guesses of what people must have said or done

I’m very fond of Watson. You’ve got to remember one or two things about that book. It was based on his letters to his parents when he was 25. It only appeared when Watson was 15 years or so older. Because he could not possibly have remembered all that detail, and relied on notes made at the time, the whole book reflects ideas about what was happening in the laboratory recorded without inhibitions by a young man from central United States. And some of it is fairly superficial. He put in things which he guessed people must have said or done, in keeping with their characters, and a young man of 25 does not know what is going on in higher circles in the laboratory as regards the politics. One of the important factors at that time was that we did not feel we ought to leap into the DNA field. Perutz and I did talk it over. But a good deal of what Watson described as my lack of interest in it was a holding back because I didn’t think we ought to enter a field in which Wilkins at King’s College had done so much work.

Recollections by Sir Lawrence Bragg on the book   The Double Helixby James Watson. Extracted from   Chemistry in Britain, April 1970.

Ed. These recollections were published on the occasion of Bragg’s 80th birthday on 31 March 1970. They cover his early work with his father and J J Thomson, and his major contributions at the University of Manchester, the National Physical Laboratory, the University of Cambridge and the Royal Institution. Bragg’s recollections were followed by an appreciation by Max Perutz.