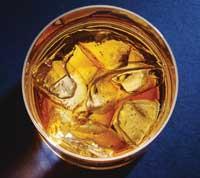 Whusky haes tae stey in barrels tae let the fug get oot! (preferential evaporation through the wood in the headspace of volatile-HS compounds).

An’ dinna tell me that wee mannies in white jaykets, for a’ thir ken about GLC an’ a’ that, can speed it up. Ye canna mak’ a braw cuddy oot o’ a dud yin by skelpin’ its hunkers!

Letter from Ewan McSiccar, Achhoe, Perthshire, Scotland, in   Chemistry in Britain (March 1969) in answer to a letter questioning the need for whisky to be stored in wooden casks for a minimum of seven years.

Ed. Under the Scotch Whisky Act 1988, Scotch whisky must be matured in an excise warehouse in Scotland for at least three years in oak casks of a capacity not exceeding 700 litres. Most single malts are offered at a minimum of eight years of age. Nowadays the casks used are typically sherry or bourbon casks.

For more information on the chemistry of whisky, especially the hundreds of flavour constituents in Scotch whiskies, see  Chemistry World  (September 2008, p40).