45 years ago in Chemistry in Britain

The teaching of chemistry at Glasgow University (founded in 1451) as a separate science was inaugurated in 1747 by William Cullen who, with (Joseph) Black and their students, directed the venture for over a century (1747-1852). A second chemistry class was started by Alexander Ure in 1804 at the new Anderson’s College (Strathclyde University since 1964). 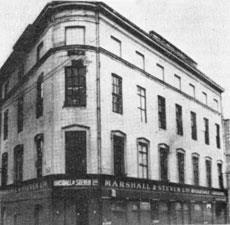 By 1811, Thomas Thomson split his chemistry class at the university and performed twice daily, while Thomas Graham of Anderson’s, who ’carried away the listeners with irresistible force,’ edified even larger numbers.

In 1831 Thomson was installed in the famous Shuttle Street laboratories, which were at the time the most up-to-date in Europe; they cost ?5000.

In 1870 James (’Paraffin’) Young, a governor of Anderson’s, provided the Young Technical Laboratories - and just failed to install W H Perkin Sr as their first director.

Today the two chemistry departments, with about 3000 students and about 100 staff, under J Monteath Robertson (Glasgow University) and Patrick Ritchie (Strathclyde) are ranked among the most populous, effective and fruitful laboratories in the land.

Extracted from  Chemistry in Britain, March 1965  .

Ed. The chemistry departments at Glasgow and Strathclyde universities united their research facilities to form WestChem in 2005, as part of the ScotChem project for pooling resources across Scottish universities.