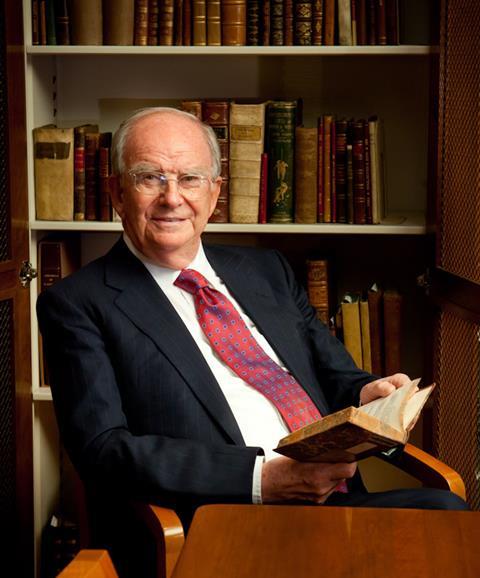 At a meeting in Cambridge in 2007 to mark the 75th birthday of John Meurig Thomas (known affectionately as JMT), the Nobel laureate Ahmed Zewail paid tribute to his prolific and profound contributions to the science and technology of nanoporous catalysts and to his brilliant teaching and promotion of science to the public. But there was more. A Welshman to the core, JMT’s masterful presentations were recognised for their clarity, eloquence and scholarly intellect, with close friend and eminent scientist David Buckingham noting: ‘His command of the English language sets a standard for us to aspire to, and this despite English being his second language’.

JMT was born on 15 December 1932 in Llanelli, the son of a coal miner, and brought up in the Gwendraeth Valley in Carmarthenshire, Wales. He felt fortunate that education reform meant that he did not have to follow his father and brother down the mines. That surely honed his life-long vision that higher education can indeed enable social mobility.

Following graduation from the University College of Wales, Swansea, Wyn Roberts, later best man at JMT’s wedding to his first wife Margaret, persuaded JMT to transfer his PhD research from the study of steroids to solids and surfaces. A short postdoctoral period at the Atomic Weapons Research Establishment at Aldermaston proved less than happy. However, intensive reading convinced him to apply his creative research to a position at University College of North Wales, Bangor, where he rose from assistant lecturer to reader within 1958–1969. There, he moved successfully into a field then much neglected by chemists: the way in which natural structural defects can completely dictate the electronic properties of solids.

There followed nine highly successful years as professor and head of chemistry at the University College of Wales, Aberystwyth, during which time he employed the emerging, advanced analytical techniques of photo-electron spectroscopy and high-resolution electron microscopic imaging, adapted and applied to natural clay minerals and catalysts. He also initiated the modern field of crystal engineering. Times change, but the remarkable achievements (and ability to attract collaborators and visitors worldwide) of JMT’s research groups at those small university colleges in Wales in the 1960s and 1970s should be a reminder that not all world-class research necessarily emanates from large institutions.

Then came the first Cambridge period, where in 1978 he was appointed head of physical chemistry and professorial fellow at King’s College. A particularly important advance there was his multi-technique application of high-resolution electron microscopy and magnetic resonance to zeolites and other nanoporous catalysts. The application, in the early 1980s, of computation in solid state and catalytic chemistry was indicative of JMT’s flair for appreciating, early on, the potential of a new technique when most of the community thought it to be completely irrelevant. He also realised, in the 1990s, the growing power of both spectroscopy and diffraction techniques based on synchrotron radiation, which his team used to great effect. In his hands, and those of his co-workers, this combined computational and experimental strategy revealed what was behind the microscopic chemical action of catalytic processes.

In 1986, JMT succeeded Nobel laureate George Porter as director of the Royal Institution (RI) and Fullerian professor of chemistry in the Davy–Faraday Research Laboratory (DFRL). JMT was ideal for the RI, as it allowed him to combine his passions for research, the history of science and public engagement. He described the place as having a quasi-spiritual presence of his hero Michael Faraday around the building. And he loved the fact that he used the same furniture as Faraday had used.

Anyone who has enjoyed the thrilling experience and mastery of language of one of JMT’s trademark lectures – oft described as Faraday with a Welsh accent – will have been left in no doubt about his regard and absolute respect for the aims of his RI predecessors and his devotion to the wider appreciation of science.

After relinquishing the formal RI appointment in 1991 (although his research continued at the DFRL), JMT became part-time pro-chancellor of the University of Wales for three years. During a second Cambridge period from 1993, he was Master of Peterhouse College (until 2002) and a very active guest in the Department of Materials Science, where from 2002 he held the title of honorary professor of solid-state chemistry.

JMT was an evangelist in the promotion of science; his knighthood in 1991 was partly for the popularisation of science. With many eminent visitors to Aberystwyth, such as Kathleen Lonsdale, Dorothy Hodgkin and Roald Hoffmann (providing what he termed the window of engagement with the outside world), JMT asked that their lectures be palatable to lay audiences and local advertising always ensured full attendances! This reflected his view that such occasions were as influential as the written word.

JMT’s unabashed determination to continue and extend scientific challenges was exemplary. He continued to be highly productive up to the week he died, working through many sessions of chemotherapy. Perhaps fitting of this great scientist, on his very last day with us, a major paper appeared with colleagues on the deconstruction of plastic waste into hydrogen fuel, reflecting JMT’s long-held view that high scientific endeavour must be focussed to address the world’s sustainability challenges.

JMT was truly blessed throughout his life by the wonderful support from, first, Margaret (who died in 2002), and then from Jehane, who he married in 2010, and children, Lisa and Naomi, who nursed him through the final weeks of his cancer.

And how should we try to summarise the towering achievements and capture the spirit of this great scientist who has just left us? Among the numerous personal qualities underpinning JMT’s achievements were his passion and commitment to science (present and past), delivered to the world through humanity and a total command of the spoken and written word; encyclopaedic reading and prodigious memory; the possession of a mental ‘hard disk’, with unlimited storage capacity for the scientific literature; a natural, highly effective and encouraging mentorship to numerous junior and senior scientists; and an adventurous approach to cross-linking fundamental science and adapting diverse disciplines and techniques.

Perhaps above all else, one of JMT’s truly special qualities was his way of making instant, deep connections with another human being. We must celebrate the life of this Gwendraeth boy, one of Wales’ – and the world’s – best loved sons.

A K Cheetham
University of Cambridge