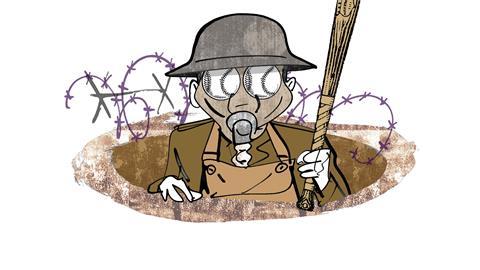 ‘I saw Christy Mathewson doomed to die. None of us who were with him at the time realised that the rider on the pale horse had passed his way. Nor did Matty, the greatest National League pitcher of them all.’ Ty Cobb, writing in his autobiography My life in baseball, never forgot his time in the United States Army’s Chemical Warfare Service during the first world war. Founded in 1918, the service was initially tasked with using poison gas on enemy positions, its regimental song boasting that it would ‘rule the battle through the elements’. By the end of that first year, it was the unlikely home to some of the greatest baseball players in the world.

Their presence was the brainchild of major general William Sibert, who planned to use baseball players as a publicity stunt. Knowing that poison gas was viewed as a scary, uncontrollable entity by the folks back home, he announced he was looking for men with inhuman skill: ‘We do not just want good young athletes … we are searching for good strong men, endowed with extraordinary capabilities to lead men during gas attacks.’ As encouragement, the men would be trained by professional sportsmen – and baseball stars were perfect for the US propaganda machine. 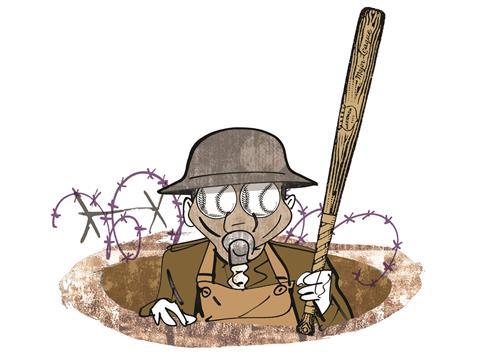 The initial batch of baseball heroes to serve in Sibert’s ‘gas and flame’ division comprised Cobb, an aggressive outfielder known for sliding into bases with his spikes up; Mathewson, a pitcher whose good sportsmanship had branded him ‘the gentleman’s hurler’; and Branch Rickey, a player-turned-manager recently fired by the St Louis Browns. None of the men were young. Rickey and Mathewson were 38 at the time, Cobb the youngest at 32. All three had volunteered. Rickey was made a major, the other two captains.

‘We wound up drilling the darnedest bunch of culls the world war one army ever grouped into one outfit,’ Cobb recalled. ‘The theory was that they would listen to well-known sport personalities – and to some extent it was effective. Those that gave us trouble and didn’t heed orders didn’t last long, for we weren’t fooling around with simulated death when we entered those gas chambers.’

The three officers were sent to France in September 1918. It was here that Cobb’s ‘rider on the pale horse’ arrived. During a routine training exercise, a missed signal meant several men didn’t put on their gas masks in time. Cobb takes up the story: ‘Men screamed to be let out when they got a whiff of the sweet death in the air, they went crazy with fear and in the fight to get out jammed up in a hopeless tangle… I fixed my mask, groped my way to the wall and worked through the thrashing bodies to the door. Trying to lead the men out was hopeless. It was each one of us in there for himself. When I staggered out and gulped in fresh air, I didn’t know how badly my lungs had been damaged. For weeks a colourless discharge drained from my chest and I had a hacking cough… I can recall Mathewson telling me “Ty, I got a good dose of the stuff, I feel terrible”. He was wheezing and blowing out congested matter.’

The training incident would be the closing chapter on the trio’s military careers. Two months later, shortly before they were due to join the front lines, the war ended. All three returned to the game they loved, thankful to have never seen combat. A fourth baseball player, Rickey’s base-stealing prodigy George Sisler, had started similar training along with American football and polo stars, but the war ended before he was shipped to France.

The three men enjoyed varying fates after their military careers. Rickey joined the St Louis Cardinals, the Browns’ local rivals. He became one of the most successful managers in baseball history, ending his career with four World Series and four National League pennants. In 1946, as general manager of the Brooklyn Dodgers, he signed African-American sensation Jackie Robinson and helped end racial segregation in sport.

A controversial figure to this day, Cobb is often remembered as ‘the meanest man in baseball’. His legacy is tarnished by everything from accusations of racism to the time he assaulted a fan who had lost all but two fingers in a printing accident, stomping on the man with his cleats while teammates held the crowd at bay. He is also renowned as one of the game’s greatest players, usually listed only behind Babe Ruth in the all-time rankings. He returned to playing and finally retired in 1928. Cobb still holds the record for highest career batting average (.366) and most career batting titles in Major League baseball. In 1936, he became the first inductee in the baseball Hall of Fame.

Mathewson was the fourth inductee, but never lived to see his name immortalised. The inadvertent exposure to gas had weakened his lungs, leading him to contract tuberculosis. Although he continued to play an important part in the sport he loved (he helped expose the 1919 ‘Black Sox’ scandal, in which the Chicago White Sox intentionally lost the World Series, today made famous by Kevin Costner in Field of dreams), his health never recovered. He died in 1925, aged 45 years. His last words were: ‘Jane, I want you to go outside and have yourself a good cry. Don’t make it a long one; this can’t be helped.’